Tailgating with One Tough Truck: The Ford Ranger Tailgate Challenge

Tailgating—it’s the quintessentially American Male thing where groups of bros hang around in parking lots (typically during a big game) with hot food sizzling on a grille and cold drinks chilling in a cooler. Although you can try doing that here in the Philippines, you’ll earn the irk of security guards even before you could unfold your bench out. So what’s the best thing you can do? Go out of town, to the middle of nowhere (preferably where trail meets road), and then whip out the grille. Of course, you need a very capable go-anywhere, do-anything vehicle and a group of the manliest men in the motoring beat to drive out of the comforts of Manila and cook burgers. And so, that’s exactly what happened with the Ford Ranger Tailgate Challenge.

Cornering the mid to high variant segment of the Philippine pick-up truck segment, the Ford Ranger is the best vehicle for this job. With owners probably spending as much time off-road as on-road, the Ranger has successfully transformed the way you look at pick-up trucks in general. Now, it’s more than just a robust workhorse; it’s an active lifestyle companion—the one you take biking, kayaking, camping, and in this case, tailgating. The Wildtrak trim, in particular, has become the legitimate alternative to mid-sized sport utility vehicles providing unique and innovative features. Style-wise, the Ranger Wildtrak differentiates itself from lesser pick-ups with the attractive Sport package: standard roof rails, sport bar, box rail, bed liner, 18-inch alloy wheels, and special decals. Inside, it echoes the luxuriously rugged look with leather on the steering wheel, seats (with contrasting highlights and stitching), and door trim.

And though the Wildtrak is the headliner of the Ranger family, even the lesser variants—the mid-range XLT and the value-oriented XL are just as impressive. They are, after all, built from the ground up to be the best-in-class in terms of power, refinement, comfort, and safety. Hammering this point across, Ford mixed several models of the XL and XLT along with the 3.2 Wildtrak and 2.2 Wildtrak for the challenge.

The point of the Ranger Tailgate Challenge is simple enough: create four burgers from scratch with a budget limit of P 1,500. Shopping for ingredients is done in a predetermined location with a 45-minute time limit and an equal amount of time set for preparation and cooking. In reality though, these manly men may be well adept at talking horsepower and power-to-weight ratio, but they are absolutely clueless in the kitchen (well, perhaps save for one or two participants). Setting a revised expectation as not to cause food poisoning to any of the judges (including Ford Philppines’s Managing Director Kay Hart), everyone was divided into pairs.

It was a reunion of sorts for me, where being partnered with Power Wheels’s Neil Pangulayan brought back memories of another Ford sponsored challenge: the Jollibee Drive Thru Cross Country Challenge two years back. This time though, instead of just serving burgers, we’ll have to make them and then serve them. Talk about leveling up the competition. 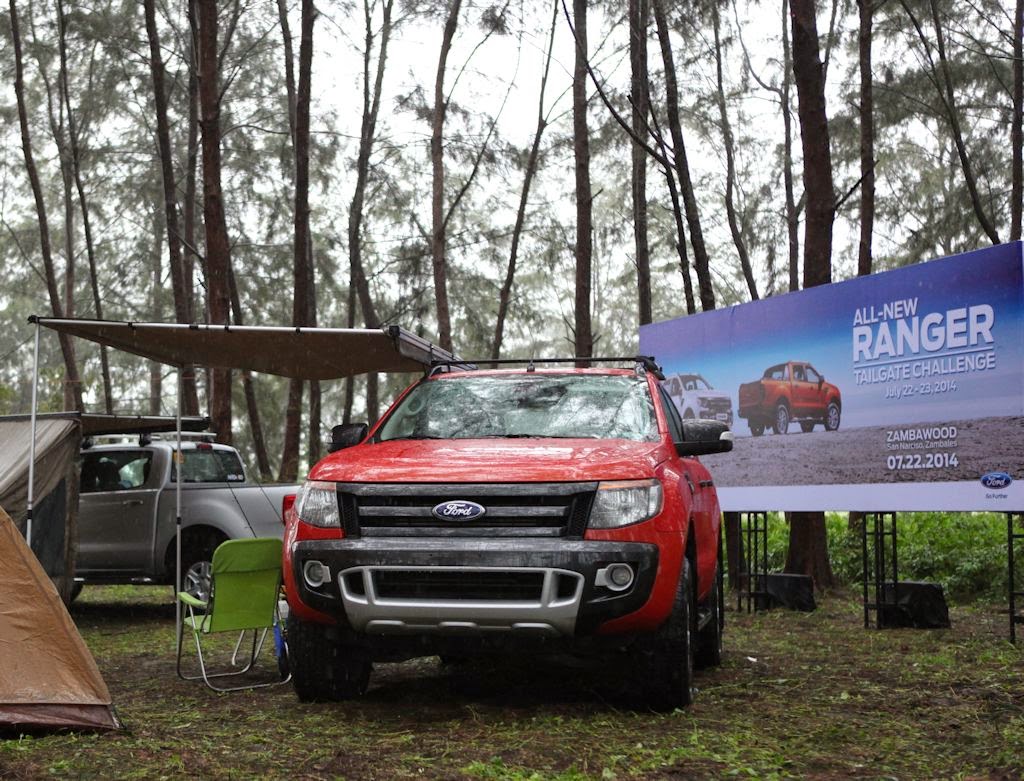 Unfortunately, the weather didn’t cooperate the day of the challenge and everyone was rain-soaked even before leaving the Ford Balintawak dealership. Fortunately, if there’s one vehicle up to the challenge of dealing with this weather, it’s the Ranger. It’s equipped with available standard features such as automatic headlights, rain-sensing wipers, and front and rear fog lamps, this is one extreme weather companion. Staying in convoy, the six Rangers briskly made its way from the fringes of Metro Manila all the way to Subic for the first part of the challenge: shopping for ingredients. Although Neil already had a good idea of what burger to do, others relied on Google to recommend burger recipes. With a minimum list of ingredients, everyone had their own unique twist to the American classic. The weirder concoctions included stuffing burgers with Spam (yes, as in the canned meat) while another had tarragon leaves. Ours relied on a cheese filling as well as a good herb rub.

After the grocery run, it was a further one hour drive through torrential rain out of the SBDA to the cook-off destination: Zambawood. Located in San Narcisco, Zambales, its namesake comes from the fact that it’s the backdrop used in various Filipino films. It’s a sprawling 26-hectare ranch estate with a unique geography includes pine trees growing by the beach. That stormy day through, the main star wasn’t Dingdong Dantes or Derek Ramsay; it was the Ranger as it plowed through the muddy, rutty trails with ease. With Neil at the helm, he’d purposely kick the tail out of the 4x2 XLT. It’s not something I’d consider the safest form of off-roading, but at least his level of confidence in sliding the Ranger’s backend showed the pick-up’s handling prowess.

At the Zambawood beachfront, owner and proprietress Rachel Harrison welcomed the teams. Serving as the fourth judge, it was beginning to feel like a scene straight of Master Chef or Hell’s Kitchen except all the cursing came from the contestants themselves. Despite the smile on everyone’s faces, there was one goal in mind: to serve four (edible) burgers before the time limit is up. There was barely any on-going conversation as some eyes swelled with tears (it was the darn onions). The silence was only broken when the team beside us asked what the eggs and breadcrumbs were for. Well, I guess some people were more clueless than we were, I thought. This gave us an extra boost of confidence and we finished what we eventually dubbed, “The 4x4 Burger” with just a few minutes to spare. Unfortunately, going against seasoned chef and veteran photojournalist Anjo Perez of The Manila Bulletin, our duo could only manage a first runner-up place. And in case you wanted to know, the burger and Spam mix won second runner-up. It goes to show you the level of ‘quality’ in this competition.

The Ford Ranger Tailgate Challenge certainly took a more light-hearted twist to the usual ride-and-drive events that everyone’s been having of late. It did reduce the macho men of the motoring beat to tears (again it was the onions, I tell you) trying to cook a decent burger, but it also showed the capabilities of the mighty Ranger. Ford has always communicated what the Ranger is capable of, but with the Tailgate Challenge, they wrapped it in a way that showcases all the real world benefits. They have showcased what a Ranger owner would and could do on a weekend when they’re not ferrying the kids to school or the wife to work. The Ford Ranger is certainly one vehicle that’s always up to the task whatever the weather, whatever the destination. And those Rhino Rack tents they had on display? Well, let’s just say it makes for another great Ford Ranger adventure soon.
at 10:15 PM