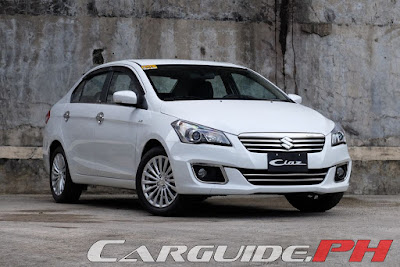 Suzuki is on a roll. Once the specialist in micro and small cars, it’s now going into bigger and better things. Granted there were some hiccups along the way (the SX4 and Kizashi to name two), the Ertiga showed Filipinos that Suzuki could also make great cars apart from the Swift. And now, it’s joined in the showroom by the all-new Ciaz. Considering that it’s competing in the lucrative, but heavily contested sub-compact sedan genre, the Ciaz is a great alternative to the usual segment stalwarts.

For starters, the Ciaz is great to look at. It’s sporty and elegant with no line out of place. It doesn’t rely on overblown and caricature-like detailing to get attention so there are no large grilles, intakes, or headlights. Instead, it’s subdued and well-proportioned throughout. It’s especially handsome from the front three-quarters where the greenhouse, hood, and fenders all do their part to create an almost miniaturized executive sedan look. Even the standard set of 16-inch rims (195/55 R 16 tires) work very well in this application. If there’s one single critique though, it’s in the rear-end treatment. It’s far too similar to another more established sub-compact sedan.

The Ciaz goes from strength to strength the moment the driver’s door is opened. Like the classy and elegant exterior, the interior is clean and well laid out. The all-black color scheme means business, and for the most part, it is. The dashboard itself is hard to the touch, but given the price tag, it’s easily within expectations. Plus, the consistent texturing and standard leather on the steering wheel and seats more than make up for it. It’s also interesting to know that apart from leather seats, the GLX variant come with keyless push start, automatic climate control, and even an Android OS-based infotainment system. The fit and finish are generally good, but there are small nagging issues like the rattling from the infotainment system and the glove box which doesn’t seem to close straight.

Suzuki is touting the Ciaz for its cavernous interior space, and they have every right to do so. Based off the Ertiga platform, which in turn is a modified Swift platform, provides good and uncompromising room front or back. The wheelbase—a generous 2,650 millimeters—already connotes good interior volume, but add to that nifty cues like the theater-styling seating and that frees up even more legroom. The rear headrests don’t adjust, but they’re comfortable enough. The trunk space is pretty much alright and it can fit medium-sized trolleys, but the flexibility is limited because the rear seats don’t fold in anyway.

Ergonomically, the Ciaz isn’t the best, but it’s surprisingly good—better than even the segment’s best seller. The driver’s seat is supportive with the right amount of side bolster and thigh support. There’s also good movement built into it; though since it’s mounted high, the most comfortable seating position is with the seat height set low. The steering wheel doesn’t offer reach adjustment, but it still falls naturally with an angle more like a sporty compact than a compromised small car. On the other hand, the pedals fall victim to poor packaging: they’re too offset to the right requiring the driver’s leg to be unnaturally spread out during driving. Though this isn’t enough to cause discomfort (even after a long drive up Tagaytay, it can be a nuisance to those with sensitive backs or legs). The instrument cluster also scores poorly for legibility, especially at night. The surrounding light rings are better lit than the numbers themselves.

With a sporty and elegant design, the Ciaz conducts itself quite nicely on the road. It doesn’t corner flatly, but it’s still pretty adept at handling curves and corners. Body roll is largely contained and can absorb the worst potholes and road cracks with aplomb. NVH is nicely contained and it’s surprisingly quiet even at high speeds. The overly light steering is also fairly precise, but the over boosted tune means it doesn’t communicate the chassis’ limits well. More than once, the steering rack will try en cashing a check the suspension can’t afford; requiring the driver to scrub speed , add more steering angle or both just to get the car dialed in. Thankfully, the brakes make for a great ally, biting well and confidently.

Instead of going with a 1.3 or 1.5-liter engine as the competition has, the Ciaz goes for the middle ground, equipping all variants with a 1.4-liter 4-cylinder engine. Shared with the Ertiga, it loses three horsepower in this particular application (92 horsepower and 130 Nm of torque). There’s no need to fret about the lost horses as it feels adequately peppy in the city. That said, the power delivery isn’t explosive and it’s not linear either. The power band is narrow and keeping it singing at its sweet spot is important for pace and refinement. At idle or full song, the engine sounds gruff, sorting itself somewhere midway. It’s great also that the four-speed automatic is up to the task; the first three gears are short, clearly for quick city pace, while the fourth tall gear means reaching 100 km/h at less than 3,000 rpm. Transmission refinement is alright, but there are some slight hints of shift shock from time to time. Fuel economy is mixed. When stuck in traffic (average speed 11 km/h) it dips to 7.14 km/L, only to reach 11.76 km/L as the speeds increase (average speed 16 km/h) up to 20.40 km/L on the highway.

The Suzuki Ciaz may not yet achieve class-leading technology or driving dynamics as its rivals could, but pound for pound, it is the most intriguing value for money champion here. There’s some ways to go to dial in the driving part right, but everything else—the exterior design, the interior packaging, the comfort—it’s all right there with the best of them. If the Ertiga and Swift made people notice a Suzuki then the Ciaz will make sure everyone will take them seriously.