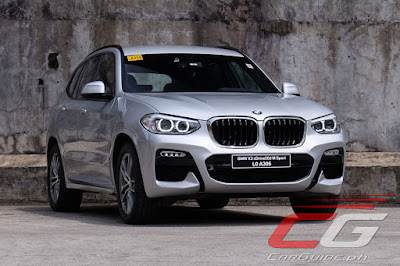 BMW has been churning out countless X models as of late, but among them, the X3 is the best-balanced. It’s always managed to tiptoe between sportiness and comfort, ostentatiousness and practicality; it’s a BMW unrestricted by heritage, but still carries enough gravitas to wear the title of “ultimate driving machine.” Sadly though, the third-generation model has somewhat blemished that reputation. While it remains one of the premium SUV-dom’s most multi-faceted and respected offerings, it’s become a victim to BMW’s own product segmentation.

Taken in isolation, the BMW X3 is a pretty good machine; it’s something you could envision driving every day and loving every single minute of it. However, an interesting shuffle over at BMW’s product planning department means that its smaller and formerly oddball-looking younger sibling, the X1 blossomed and is now catering to the same sort of family clientele previously served exclusively by the X3. Granted that the overall experience is still clearly segmented, for most buyers, both models come with similar levels of interior space (the X1 actually has slightly more rear leg- and headroom) but most importantly, the same blue-and-white roundel badge.

So how will BMW make you pay P 900,000 for what’s essentially a bigger SUV from the outside but with a smaller interior space? Simple: throw in everything, kit it with all the tech you could possibly imagine, and hope buyers will decide to cough up for the difference. Does it work? Absolutely. Is it better than the X1? We’ll get back to that later.

Underpinned by BMW’s new lighter, stiffer CLAR platform that it happens to share with the 5 Series as well, the X3 looks both new and recognizable at the same time. Though criticism could be thrown towards BMW’s way for not pushing the design envelope far enough (it looks like an enlarged X1 from some angles), it does look well-proportioned and athletic. Plus, they’ve managed to do away with all the awkwardness found in the first two generations. It’s quite lovely too that they’ve finally learned to integrate the double kidney grille and use it as a cohesive design element as opposed to just sticking it on like an afterthought. And being the M Sport model, this X3 dives deep into BMW’s motorsports catalogue and comes out looking meaner, buffer, and P 200,000 more expensive.

Inside is where the X3 has made the most strides. Although the switchgear is all corporate BMW, everything has been tweaked, milled, and screwed together with precision. The driving position is pretty much what you’d expect: correct, but cushy. Everything from the gauges, the seats, the pedals—they’re all perfectly aligned to return the most comfortable, yet engaging driving position one could wish for. It also fits almost any body type thanks to the multitude of adjustment available from the amount of side bolstering to the length of the cushions. Its usability is upped further because the memory settings (including mirrors and climate control) that can be tied automatically to the car’s proximity key. About the gauges, the X3 moves to an all-digital number this time and it’s all for the better. Although the physical chrome rings limit its potential, all the pertinent information is displayed in a clear, concise manner.

Normally a nuisance to an otherwise stellar interior experience, the X3’s latest-generation BMW iDrive brings forth one of the most beautifully done, easiest to use infotainment systems ever. Not only is the 10.3-inch screen one of the sharpest, crispest displays you can find in a premium automobile, it’s also highly intuitive and easy to master. It’s also very customizable. Perhaps the most questionable addition is Gesture Control. In theory, it allows drivers to navigate through the iDrive’s various menus by simply waving a hand near the screen. In reality, it’s unresponsive, totally unnecessary, and makes you look like a guy having fits inside an untinted demo car. Gesture Control aside, the other trimmings that BMW opted to put in are very welcome. Things like the ambient lighting, and a three-zone climate control with built-in air fragrance and ionizer are icing to a very delectable cake.

As previously mentioned, the X1 and X3 are almost inseparable in terms of interior space. By EPA standards, both the X1 and X3 have the same interior volume (around 3,633 liters); and that’s quite the bummer for those hoping that the stretched wheelbase and bigger exterior equated to a roomier cabin. Again, taking the X1 out of the picture, there’s not much to complain about in here. There’s good room front and back with a truly usable backseat and a cavernous trunk.

With a door trim that reads: xDrive20d, this particular X3 runs on BMW’s tried-and-tested 2.0-liter TwinPower Turbo diesel engine. It makes a stout 190 horsepower and 400 Nm of torque—figures perfect for a sporty SUV, only it’s not. Sure, slam on the throttle, and it can hit 100 km/h in less than 7 clicks. It can also match or outrun a similar-speced Audi Q5 or Jaguar F-Pace for that matter so it can’t be considered slow. So, what’s the problem then? It’s down to the driving engagement or rather, the lack of it.

Take it fast though a corner, push it through a bend—the X3 obliges. There’s more than enough grip from its all-wheel drive system and wide tires to keep things pointed in the right direction. It’s mechanically very good, but it just doesn’t communicate its abilities well enough to the driver. As you go about the motions of driving—steering, braking, the X3 does these things well, but it’s all done with cold, lifeless precision. BMW, it seems, has put too much emphasis on sheer numbers that it’s lost that intimate conversation with the driver. One may counter that this is an SUV and not a sportscar, and that may be true; but this is also a BMW, and as such, the standards it’s measured against is equally high.

On the flipside, the X3 has managed to climb the ladder to become its segment’s comfort benchmark. Not only is the added acoustic insulation paying off in terms of cabin quietness, but it also offers a deep-seated composure on the road. Finally, this is a BMW that has an uncanny ability to absorb ruts and coarse surfaces with ease. It’s mighty fine at faster speeds, but even more so in the confines of the city.

By itself, the 2018 X3 xDrive20d M Sport comes across as BMW’s best effort yet in the premium compact SUV segment. Not only does it have a truly elegant design and a premium-feeling interior, but it’s managed to tweak the handline/comfort balance to cater to a wider audience without upsetting BMW’s loyal customer base too. For all intents and purposes, it’s a great choice. We wouldn’t mind having one. However, in the greater scheme of things, there’s actually not much the X3 could offer that the X1 couldn’t. Yes, it does deliver a tech-laden experience and that’s a wow factor for sure, but is it enough to counter the X1’s aggressive price point and packaging advantage? Perhaps not.