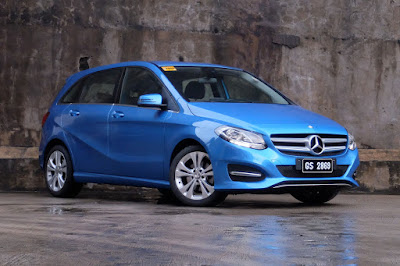 Despite what other people say, the Mercedes-Benz B-Class is one likeable car. It’s not perfect, but after some days in it, it’s easy to prefer it over its more stylish sibling, the GLA-Class. While it fulfills a very particular niche—one whose needs center around a car with comfort, space, and one that carries a premium brand; it shouldn’t matter. In the end, it’s a sorted little number that deserves a look because it appeals to the sensibilities more than it does to the senses.

Mercedes-Benz describes the B-Class as an “MPV” (well, Compact Sport Tourer in their parlance) and while some would scoff at this notion, it’s worthwhile remembering that our notion of what a “Multi-Purpose Vehicle” is largely dictated by American ideals: a car-like loading height, seating for 7, and possibility having sliding doors. For Europeans though, MPVs are basically the lovechild of hatchbacks and bread vans with small footprints and tall rooflines.

As such, not much can be said about the B-Class’s styling. However, given that it’s limited by the prerequisites of its vehicle genre, it’s a handsome effort. The corporate grille and headlights do their job, but it’s actually the interplaying lines that deserve the most credit. They manage to pinch the otherwise flabby sides and unwieldly roofline, creating more of an athletic look. 17-inch alloy rims also manage to fill in each corner of this Urban trim excellently. What’s missing? It’s actually in the little details; details like having halogen headlights instead of HIDs or LEDs. Given the B-Class’s price point, I guess there would really be some trade off, but it’s also worth remembering that cars a quarter of its price would sport fancier headlights already.

Opening the upright, square-cut doors reveal a surprising amount of space. The front seats are cushy and wide, though the most comfortable driving position is more upright. The seat height, even at its lowest setting is somewhere along the middle ground between a conventional hatchback and MPV. This may turn off those wanting a sporty feel, but it undoubtedly gives it excellent visibility. Moving to the back, Mercedes-Benz claims that the rear quarters offer legroom equaling to that of an S-Class. While that’s open for debate, there’s no denying that it’s comfy for kids and plus-sized adults alike. That said, comfort in the second row’s middle seat is still questionable with its narrow cushion and obtrusive center tunnel.

More than just outright space, the B-Class’s best highlight is its use of upscale materials. It may be the entry-level Mercedes-Benz, but it sure doesn’t feel like it. Poke around and the materials are all soft-touch; while the use of aluminum detailing (with a sail-pattern trim on the dash) add some much-needed highlights. While designers have gotten the hang of giving it an upscale look and feel, this car’s also not shy in announcing its status as the lowest rung three-pointed star you can buy. Aside from the powered driver’s seat, there’s not much in way of luxury or convenience features. Climate control? Manual. Speakers? Just 6. Rain-sensing wipers? Turn it on yourself. Push-button start/stop? Twist the key.

While the B 180 doesn’t tick all the boxes when it comes to creature comfort features, at least when it comes to the all-important drive, it actually does well. Packing a turbocharged 1.6-liter engine, it produces 122 horsepower and 200 Nm of torque. These figures certainly look average, but what’s notable is that peak torque is shoved in from as early as 1,250 rpm all the way to 4,000 rpm. This results in brisk progress be it from a standstill or during an unplanned overtaking maneuver. The 7-speed dual clutch though feels a bit mismatched to the engine. Left to putter around in traffic, it’s alright with smooth, decisive shifts. Push it hard though and it feels far too aggressive for this little powerplant.

Ditching the complex sandwich construction of previous models, this new B-Class finally gets the platform it needs. Lower center of gravity paired with an all-around independent suspension gives it truly Teutonic levels of ride and handling. Fitted with “Comfort Suspension,” the ride is still firm, but composed and actually acceptable enough for use on Manila’s roads. While the GLA-Class is overly choppy on less than smooth roads, the B-Class actually manages to tackle imperfections way better; though those in the second row may find themselves being tossed and turned. Handling is composed and offers enough grip to inspire confidence, although the steering gives little in way of feedback. Additionally, the number of interior rattles and shimmies is worrisome for such a premium brand.

While an all-new B-Class is along the way, the current B 180 Urban is still a success for Mercedes-Benz in many fronts. Not only have engineers managed to banish away the weirdness that plagued previous B-Class models, but they’ve also managed to make it a better fit not just within their line-up, but more importantly, against other brands as well. Thanks to its mix of excellent quality and generous space, the B-Class has become an invitingly unconventional choice in the world of premium hatchbacks.