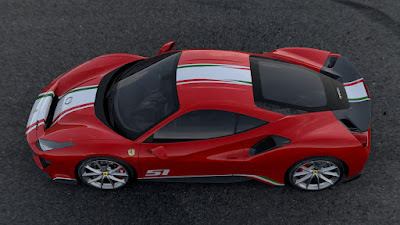 Inspired by AF Corse’s no. 51 car, with which Alessandro Pier Guidi and James Calado won the 2017 FIA World Endurance Championship (WEC) Drivers’ and Manufacturers’ titles, the 488 Pista Piloti is based off the racing version of the “regular” 488 GTB. It sports an F1-style S-Duct, a large rear diffuser, and a carbon fiber ‘dovetail’ suspended rear spoiler. All in all, it generates 20 percent more downforce than the 488 GTB.

Moreover, it’s embellished by a laurel celebrating its WEC title, the logo of the championship, and the word “PRO” indicating the class the car raced in. It also has Italian flag livery features on the flanks with a personal race number each owner can add. Naturally, it also comes in four racing inspired colors: Rosso Corsa, Blu Tour De France, Nero Daytona, and Argento Nürburgring.

The interior, in black Alcantara, includes seats upholstered with a special perforated version of the same material that incorporates the Italian flag in the central band of the backrest. The national colours are also clearly visible on the edge of the gearshift paddles and on the floormats which, like the carpeting itself, are made of a special technical fabric. The number that features on the external livery also appears on the base of the steering wheel, while all the carbon-fiber trim parts have a matte finish. The personalisation of the interior is completed by an exclusive identification plate and sill trim in carbon-fibre, the latter with the Tailor Made logo. 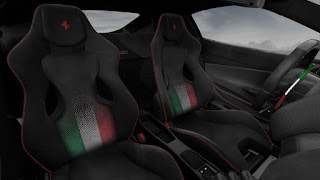