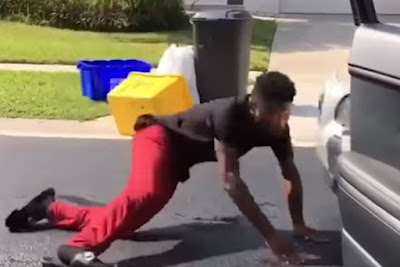 If you watch a lot of Air Crash Investigation, you certainly will know what the NTSB is. But if you don’t, that acronym stands for The National Transportation Safety Board. It’s a US-based government investigative agency responsible for civil transportation investigation. They typically deal in big ticket stuff—airplane crashes and all that, but today, they’re also warning people against jumping out of a moving car and dancing to Drake.

The #InMyFeelings Challenge (yes, in this day and age, you can’t forget the hashtag), has people turn on the song In My Feelings by Drake, start driving, open the car door while it’s moving, and jump out and dance. To the surprise of no one except perhaps these idiots, many attempts end up badly. Some eat dirt, some up chasing after a runaway car, some even get hit by oncoming traffic. Oh, and people post this stuff on social media as well showing the entire world that they’re not exactly the sharpest knife in the drawer.

Now, if that isn’t enough to convince you, NTSB Safety Advocacy Division Chief Nicholas Worrell had this to day about this stupid act:


Driver distraction has been a target of our Most Wanted List (MWL) for years, and just taking a video while driving invites tragedy. Thousands die, and hundreds of thousands are injured in distraction-related crashes every year. This specific trend is too recent—and, with any luck, will be too short-lived—for us to learn something new by investigating any crashes, injuries, or fatalities it may cause. However, the unnecessary risks inherent in the challenge should not simply be overlooked.

Driver distraction features prominently in this viral challenge, but the more obvious risk is the poor decision to hop out of a moving vehicle to dance. Although “Bad Decision Making” is not on our MWL, we have seen a variety of crashes attributable to making poor choices…

…Preventing death or injury from #DoingtheShiggy is comparatively simple: Don’t jump out of a moving car for a meme. That’s it. It’s foolish, it puts other road users at risk, and, it’s an excellent way to suffer road rash, legal penalties, or worse. By posting such a video, you’re providing evidence not just of your dance moves, but of any laws you may be breaking.

Avoid becoming—or causing—an #InMyFeelings fatality. All you have to do is not jump out of a moving vehicle. Crashes happen fast, sometimes in the blink of an eye. Driving distracted is dangerous and can be deadly. No call, no text, no update is worth a human life. No dance is either. In my feelings, that’s a pretty simple ask.