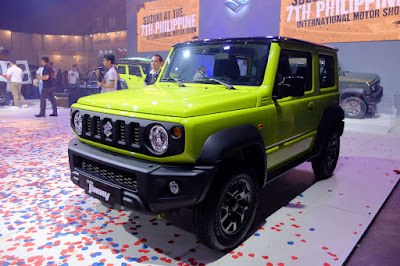 This all-new model takes on many of the Jimny’s heritage elements and gives them a modern twist. It features round headlights with separate signal indicators, horizontal slits on the fenders, a clam shell hood, five vertical slats on the hood, and rear combination lamps located at the bumper. Inside, it features a simple, easy-to-use cabin that’s designed to be operated effortlessly even when wearing gloves.

Shuzo Hoshikura, vice president and general manager of Suzuki Philippines for Automobile says that the exact timeline for the Jimny’s launch timeframe is still being determined given that the Kosai, Shizuoka assembly plant is already having a hard time keeping up with the strong demand for this small SUV. However, it’s safe to assume that it’s going to be sometime second or third quarter of 2019 with a price hovering around P 1.1 million.

Suzuki Philippines is also tight-lipped on the number of Jimny variants they’ll have on hand, but based on what they showed at PIMS, there will be at least two variants: a base and a high trim model. The base model is distinguished by its matte black bumpers and monotone color scheme while the high trim model gets high-gloss black bumpers, a two-tone color scheme, and additional niceties such as cruise control.