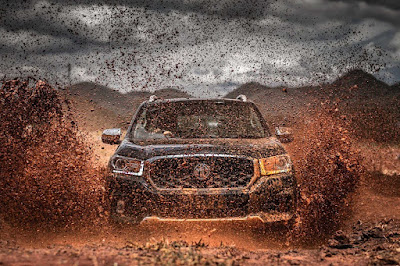 By and large, it’s easy to tell which vehicle segments MG and Maxus would compete in—if it’s a passenger vehicle or light SUV, it’s an MG; if it’s a commercial vehicle or light truck, it’s Maxus. With both brands belonging to China’s SAIC Group, that’s all well and good; that is, until you get stuff like the MG Extender.

Made for the Thai market, the MG Extender is the British/Chinese brand’s first-ever workhorse that’s basically a re-badged Maxus T70 (which is in turn essentially a refreshed T60). Still, whatever the badge, it’s fairly new, launched at the Auto Shanghai last April.

Perhaps the most interesting thing about the MG Extender is its powertrain. It debuts a new family of 2.0-liter common rail direct injection diesel engines made by SAIC and get this, in its base form, it already makes 161 horsepower and 375 Nm of torque thanks to a single-turbo configuration. Add another turbo, and the outputs go up to 214 horsepower and 480 Nm of torque—figures which make it a Ranger Raptor fighter (at least in a straight line). Available transmission options are a 6-speed manual or 6-speed automatic while the four-wheel drive model coming with a locking rear differential.

In its home market of China, the MG Extender already has electric power steering (though the Thai market uses the traditional hydraulically-assisted rack). Built on what MG/Maxus calls FSF or Full Space Frame chassis structure, it’s ultra-rigid. With 255/60 R 18 wheels, its turning radius is rather large at 6.3 meters, but at least it gets four-wheel disc brakes as standard.

Whether it’s branded as an MG or Maxus, it boasts of features such as LED headlights with daytime running lights, automatic climate control with rear vents, push-button engine start/stop, leather seating, and a 10-inch touchscreen infotainment system with 6 speakers. In the safety front, it packs stuff like 6 airbags, ABS with EBD, hill start and descent assist, tire pressure monitors, stability control, and a rear-view camera.

Currently, neither The Covenant Car Company (TCCCI), the distributor of MG nor Ayala Automotive, the distributor of Maxus has given any indication on which of them will eventually sell the MG Extender / Maxus T70. Regardless, it’s worth noting that this pickup is destined by SAIC to be a global model. So the question beckons: would you rather have this with an MG or Maxus badge upfront?
at 4:19 PM