Yes, You Can Place an Order for This P 230-Million Pagani 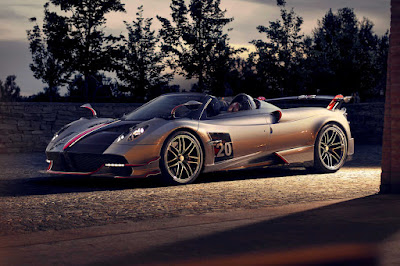 If you happen to have P 230 million lying around, then you may be a candidate for one of 40 Pagani Huayra Roadster BCs. Not content by simply chopping off the roof, the Huayra Roadster BC reduces its weight, increases its power and aero, and adds even more unique styling details.

At the heart of the Huayra Roadster BC is a bespoke Mercedes-AMG engine with two new turbos, twin throttle bodies and four water-air intercoolers. The result? 800 horsepower and 1,050 Nm at a lowly 2,000 rpm. Power is sent to the rear wheels via a 7-speed automatic transmission with an electro-mechanical differential, and a titanium six-pipe exhaust setup passes the most stringent emissions standards without the use of a hybrid.

The engine is then connected to an ultra-light and super-strong carbo-triax HP62 and carbo-titanium HP62 G2 with front and rear tubular steel subframes. The suspension is set up with forged aluminum alloy independent double wishbones, helical springs, and electronically controlled shock absorbers. It sits on forged monoblock aluminum alloy wheels (20-inch in the front, 21-inch in the back), which are wrapped in Pirelli P Zero Trofeo R tires (265/30 in front, 355/25 in back). Total weight is a mere 1,250 kilograms, yet Pagani says it can handle more than 1.9 g of lateral force during constant running, and a peak of 2.2 g.

Inside, the Huayra Roadster BC features materials like carbo-wood, embossed leather, four-point seatbelts, and a 9-speaker audio system.

Without taxes, the Huayra Roadster BC already costs 3,085,000 Euros (~ P 177 million). Tack on the 30 percent import duties alone is enough to bring the price up to P 230 million. Realistically, the price could breach P 300 million depending on the specific option. Now, if you’re still interested in getting one, Pagani’s sole Philippine agent—Autohub can get you one, if it hasn’t already been sold out.