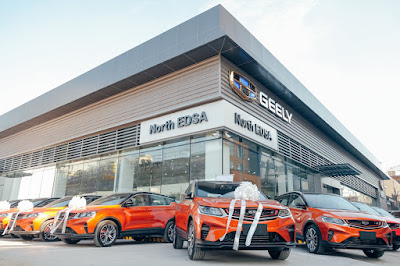 The day after its official brand launch in the country, Sojitz G Auto Philippines, the distributor of Geely vehicles opened its first showroom located in the heart of Quezon City.

Located at 75 Corregidor Street EDSA, Quezon City, the 1,160 square-meter showroom can display up to 20 vehicles inside, while a 2,600-square meter space is dedicated for aftersales service. This is notable because it’s considered one of the largest service centers for Geely globally.

Before its showroom opening, Geely started pre-selling the Coolray through a mall road show. The pre-selling campaign which had stops at U.P. Town and Trinoma in Quezon City and Uptown Mall in BGC garnered more than 50 Coolray reservations. Some of these units were officially turned over to their owners as part of the showroom inauguration ceremonies.
at 5:00 AM