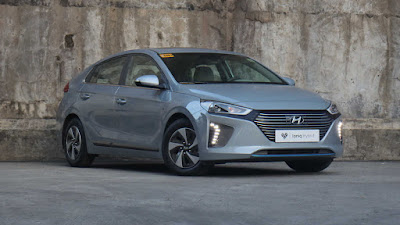 Hybrids are commonly associated with manufacturers like Toyota, and that’s understandable because the Prius is the world’s best-selling hybrid and is the official poster child of environmentally-conscious motoring. That said, some don’t want to drive a Prius, and that’s understandable. It’s weird-looking, and at least in the Philippines, priced like an executive sedan. Enter the Hyundai Ioniq Hybrid—a car that says it’ll do everything the Prius can do. But the question is, can it do things better?

Starting with the looks, the Ioniq at the very least looks like a regular car. Unlike the Prius which seems to have gotten weirder (and uglier) with each generation, the Hyundai is an easier pill to swallow. Sure, there are some obvious “eco car” markers like the twin-window hatchback (for aerodynamics) and blue highlights, but for the most part, it avoids pretentious individuality. The demo unit rolls on rather tall-looking 195/65 R 15 rubber, but customers can at least get a dose of sporty style thanks to standard 225/45 R 17 ones.

As with its exterior, the interior purposely avoids heavy doses of sci-fi styling in favor of something much more down-to-earth and ordinary. The toned-down interior is also filled with blue highlights, but aside from that it doesn’t stray far from Hyundai’s corporate formula which is solid and ergonomic, if a bit boring. It dips into the parts bin for switchgear, and there are some odd hard plastics here and there, but for the most part, it can stand toe-to-toe with Toyota’s efforts. The light gray color scheme won’t do well to hide scuffs and stains, but at least it does give it an airy feel. In terms of interior space, it’s at par with typical compact cars though the sharply-raked hatch does reduce its luggage-carrying capability unless the retractable cargo cover is completely removed.

In front of the driver is a 7-inch LCD instrument cluster with crisp, easy-to-understand graphics. Without a doubt, the general layout mimics Toyota’s, but Hyundai has managed to school its Japanese counterpart on how to make the fonts and menus look more high-tech, yet approachable at the same time. Towards the middle, there’s yet another 7-inch touchscreen which serves as the infotainment system’s main interface. Some functions are counterintuitive and requires going through various sub-menus (saving radio presets for one), but at least Apple CarPlay and Android Auto are standard here—something that can’t be said with the Prius or even the Corolla Hybrid. Rubbing salt into Toyota’s wounds, there’s even a Qi wireless charger that helps keep smartphones juiced up even without the need for cables. There’s even an innovative climate control setting that blows cool air only on the driver’s side, reducing power consumption. Neat.

Hyundai says one of the main aims of the Ioniq is to offer a more engaging driving experience compared to other hybrids. While that sounds like a tall order because hybrids typically sacrifice everything else for fuel economy, at least this one is built on the right foundations. Riding on the same platform as the Elantra, the Ioniq gets a unique multi-link rear axle and various aluminum bits (hood, tailgate, and suspension to name three) to keep the overall weight down. True enough, it tips the scales at just 1,374 kilograms—comparable to other compact sedans.

For its drivetrain, Hyundai opts to keep things simple too, pairing its Kappa 1.6-liter 4-cylinder engine with an electric motor. Combined, it may make just 140 horsepower, but thanks to the 265 Nm of torque (and managed weight) the Ioniq is effortless to drive, especially in the urban confines. It’s no hot hatch or performance car by any stretch of the imagination, but at least it never feels underpowered, either.

Eschewing a CVT for a six-speed dry-type dual clutch, the Ioniq successfully eliminates the droning and “elastic” sense of acceleration. The gearbox actually does a good job of fading into the background, shifting quickly and locking the engine back into the front wheels with minimal hunting. It’s smooth and refined especially in stop-and-go traffic. It’s even got steering wheel-mounted paddle shifters, but be forewarned: they’re hardly engaging, so best to leave the transmission to do its own thing.

Once it moves, the Ioniq impresses with its smooth ride. The chassis is on the pleasant side of firm, but an odd bump-thump from the rear end appears every now and then. Regardless, for the most part, it’s great at muting road noises and minor surface irregularities. The steering is light, but direct and accurate to help place the car precisely on the road. The brakes too feel like a step ahead of most regenerative systems, switching between braking on the motor and braking mechanically smoothly.

Of course, the Ioniq’s biggest boon is its fuel economy. Despite its small solid-state 1.56-kWh lithium-ion polymer battery, it still manages 17.24 km/L. It doesn’t touch those from Toyota’s stable, but it can easily match the likes of the Accent diesel. It’s worth saying though that this high fuel economy figure is reached only with a sensible right foot; not unlike a diesel which drivers can push hard and still get the same levels of frugality. This is certainly not a car that wants to be pushed.

Now, while the Corolla Altis Hybrid stole the headlines with its affordable price tag, here’s a surprise: the Ioniq Hybrid is even better value for money. Priced at P 1,548,000, it undercuts the Toyota by around P 32,000 and still comes respectably loaded with HID headlights, a sunroof, powered driver’s seat, and an auto-dimming rear view mirror.

As it stands, the Hyundai Ioniq rocks up the hybrid segment, managing to take the Prius (and even the Corolla Altis Hybrid)’s cake and eat it too. It doesn’t push the hybrid technology envelope by a lot, and that’s the point. Instead, it offers incremental improvements and with that, it brings gasoline-electric hybrid technology to a more affordable price point. More than anything, it does so with none of the awkwardness and weirdness.