The 2019 Subaru Forester 2.0i-S EyeSight is More Mainstream Than Ever 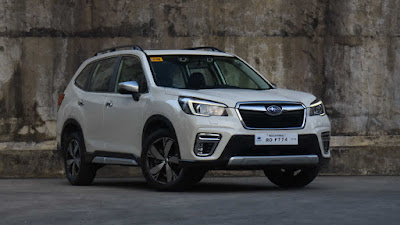 With the same running gear as the mid-grade Subaru Forester 2.0i-L EyeSight, it’s sufficient enough to say that this high-trim model, the Forester 2.0i-S EyeSight drives the very same way. You can check out the more extensive review here, but if you want the gist, read on.

Compared to the previous Forester and even to the newer breed of compact SUVs out in the market, the Forester now wears practicality on its sleeve. While exterior proportions remain close to its most immediate predecessor, it’s grown by a lot inside. Space, whether for front or rear occupants, is abundant, and the cargo hold can actually swallow three full-sized luggage without the need to flip the seats down.

Styling, as typical with Subarus, is more evolutionary than revolutionary. The overall silhouette is still reminiscent of the third-generation model—a model that made its debut a decade ago. Yes, it’s a little bit chunkier and beefier in places. Sadly, it still doesn’t have that “wow” factor despite what Subaru ads say.

Now, while Subarus have great aftermarket potential, this top-trim model, the 2.0i-S EyeSight is made for those who’d like to keep their compact SUV well enough alone. Compared to the lower-tier models, this one sports silver-colored bright work on the bumpers and side skirts, gains larger alloys (18-inchers), and gets the benefit of front LED fog lights. Oddly enough, all these can be purchased as accessory upgrades even for the lower trim models. If you happen to scoff at that, then clearly this variant isn’t made for you.

Who is this for then? It’s for your dad or your mom, your uncle or your auntie—someone with a drive and forget mentality (imagine the number of “lady-driven only” Forester ads that’ll creep up in the future).

Of course, being your auntie’s SUV of choice, forget about advanced connectivity options. For as long as she’s happy with Bluetooth connectivity, the Forester delivers. For those who’re a bit more techie though, it’s severely lacking. The infotainment is a step back from the standard Starlink and comes with low-rent graphics and lacks Apple CarPlay and Android Auto. Well, at least it has a sunroof.

The evolutionary styling may be a downer, but according to Subaru this is what their customers want. True enough, not only does it still boast the best visibility in its class, but it comes with a number of nifty features that make it the strongest off-roader in its class. Headlining these features is the enhanced X-MODE system. Unique to the 2.0i-S EyeSight model, it makes tackling (light) trails a single-button affair with presets for snow/dirt and deep snow/mud.

Hand-in-hand with this surefootedness is a brand-new platform. Thanks to the Subaru Global Platform, the Forester actually feels sturdy now as opposed to feeling soft and putty-like before. It feels bigger than its size suggests from behind the wheel, but the steering maintains a nice sense of pointiness and is easy to maneuver around. The chassis it’s connected too is also neutral and obedient making it a pleasant choice to take through a winding road.

With the turbocharged engine saying goodbye for this Forester, don’t expect an orgasmic drive; hell, don’t even expect it to give you a boner. Instead, driving the normally-aspirated 2.0-liter Flat-4 is a practice in careful planning and patience. Sharper throttle responses hide its weakness at low speeds (the CVT also mimics shifting), but take it out on the open road and the additional heft stunts performance. Executing an overtake means having to hear the engine constantly drone at 3,000 rpm. Oh, and this doesn’t do favors for fuel economy which ends at a sad 6.49 km/L.

This generation of Forester also debuts Subaru’s unique driver assistive system, Subaru EyeSight for the first time in the Philippines. Compared to previous experience with the 2.0i-L EyeSight, there are far less false warnings here. Oddly enough, the addition of EyeSight means the deletion of things like blind spot indicators, auto high-beam assist, and auto-dimming rear view mirrors. In short, all the safety features seem to point forward, with none for the side or for the rear—and this is for a P 1.828-million SUV.

It’s very clear that the Forester 2.0i-S EyeSight is shying away from its tuner image, and now embraces the requirements of the family man (or woman). In abandoning its last shred of youthful abandon though, it becomes a more confident, more cohesive feeling compact SUV. Boring it may be on paper, but take one for a spin, and you’ll be surprised that its more mainstream positioning makes it an easier SUV to consider.