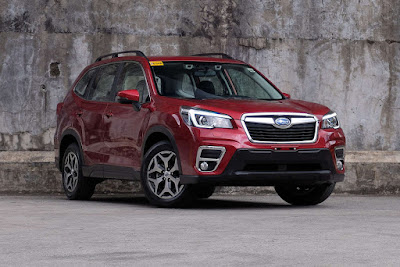 Everyone grows old, it’s inevitable; the difference lies in how people react to it—some resist the change, while others embrace it. Now on its fifth-generation model, the 2019 Subaru Forester lies squarely in the latter. Gone are the days of him being free-spirited and a slightly quirky young gun; this one takes his vitamins every morning and a chamomile tea every night, especially if he’s had too much to eat. Gone are the days of late-night raves, now he has to be at bed by 9 PM. In short, the Forester’s now hit the midlife, and he’s fully embraced it. He’s the Tito of Compact SUVs, and he doesn’t care.

Compared to newer compact SUVs out there, the Forester’s learned to be confident fashion-wise. While others look like they’re still experimenting with skinny jeans and ankle pants (or whatever else millennials wear these days), this one’s learned to dress for comfort. This year, he rides on an all-new platform and none of the body panels have been carried over, but in all honesty, he’s got the same silhouette he’s had since 2009. This is like Subaru deciding that Lacoste shirts are trendy now as they were a decade ago; bad news is that they’re not.

Overall, the Forester’s an evolutionary concept everyone’s already seen before. He’s a bit more chiseled and more refined now, but he’s still rocking the baby pink collared shirt thinking it’s the coolest thing in his wardrobe. Oh, and this year, he’s even paired it with cargo pants and a fanny pack too—because Titos could always use more pockets. It’s definitely a look that won’t woo the ladies for a one-night stand, but it’s one that signals reliability and therefore, “marriage material.”

Open the door and you’ll find that Subaru’s put the cargo pants and fanny pack to good use. The Forester is now unmatched in its feeling of airiness and spaciousness. Though external dimensions remain almost unchanged from before, it’s grown tremendously inside. For one, the front seats are wider and offer better support, even boasting 8-way power adjust (with memory for the driver) for maximum comfort. Then, the rear seats have grown making it one of the best, if not the best in terms of head- and legroom among compact SUVs. The adjustable rear back rests, a Forester trademark since 2009, is gone, but that hasn’t affected passenger well-being. There are also rear A/C vents and USB charging ports now too, making this one practical choice for families. Oh, and there’s the cargo space. It still falls short in terms of cavernous to something like the CR-V, but the ultra-wide loading bay can swallow Tito things like a golf bag without a hitch.

Compared to previous Forester generations, this comes across as one who’s learned the finer things in life. It feels more premium and more upscale with soft-touch materials, supple leather, and tactile switchgear dotting the cabin. Yet, it remains friendly, approachable, and not attention-grabbing as any decent Tito should. The ergonomics are spot on and the visibility is unparalleled. With three separate display zones—the instrument panel, the top-mounted multi-information display, and the center infotainment system, everything may seem confusing at first, but after finding out which button controls which display, it becomes second nature. If there’s one bit that needs improvement, it’s the infotainment system. With its low-resolution appearance, emphasized even more by its large screen size, it looks incongruous next to the other decidedly high-def displays. Plus, Apple CarPlay and Android Auto are nowhere to be found.

As previously mentioned, the 2019 Forester rides on an all-new platform and single-handedly, it’s reason enough to get this fifth-generation model over the still-on-a-runout fourth-generation one. It’s called the Subaru Global Platform, a rather unimaginative name for something that’s downright transformative.

This Tito may not look that far different from what he was a decade ago, but by the way he conducts himself on the road, it’s clear that he’s been hitting the gym. The differences between the Foresters of old and this one is night and day. For starters, it gives the impression that it’s actually made of sturdy stuff now. Compared to the floppy, twist-prone putty-like platform of before, this one goes through any obstacle like it’s built from one solid mass. It’s flex-free and devoid of any rattle or squeak.

It’s also extremely hushed too, that it not only quells the outside environment, but it reduces the buzzing sound of the Lineartronic CVT to the barest minimum. It’s so quiet that at times, you’ll actually hear the clicking sound of various switches and solenoids.

Improved NVH aside, the stronger platform has enabled Subaru to equip a softer suspension too. It makes for a much more comfortable, more pliant ride through any sort of terrain soaking up bumps and cracks effectively.

The strong platform and pliant suspension aside, the Forester remains one obedient SUV. It feels bigger than its size suggests from behind the wheel, but the steering maintains a nice sense of pointiness. It’s not sportscar obedient, but it’s better balanced now. The chassis it’s connected too is also neutral and obedient making it a pleasant choice to take through a winding road. There’s also far more grip now, especially when pushed the extra bit offering a great feeling of control and security.

Now, while there’s no mistaking the Forester’s been pumping iron now, he could do a bit more cardio. As he stands, the 2.0-liter direct-injected FB20 is more alright than wow. Shared with the Impreza and XV, it makes the very same outputs: 156 horsepower and 196 Nm of torque. Yet, because it’s carrying more weight (100 kilograms more than the XV and 165 kilograms more than the Impreza), the performance feels stunted.

When driven in traffic, things aren’t too obvious given the sharper throttle response, even with the switchable SI-Drive set to Intelligent. But, bring it out of the city, and the shortness of breath becomes way too obvious. Overtaking maneuvers must be carefully planned, and even those executed well are accompanied by the transmission sounding like it’s working overtime to adjust its ratios to something more workable. Oh, and that added mass doesn’t do any favors to the Forester’s fuel consumption as well: 6.25 km/L compared to the XV’s 8.58 km/L.

At P 1,698,000, the Forester 2.0i-L is priced not to break the bank, yet it comes well-loaded with features that’ll make most other crossovers in this price range green with envy. Aside from the power seats, leather upholstery, and even power tailgate, it even has Subaru’s advanced driver assistive system, Subaru EyeSight. Like its implementation in the XV and Levorg, it’s the one system that actually works in Manila traffic. However, it must be said that there are far more false alarms here than in previous drives combined. It’s worth noting too that it may have the stereoscopic cameras, but it doesn’t have blind spot indicators, auto high-beam assist, and auto-dimming rear-view mirrors—things the more affordable Subaru XV 2.0i-S has.

Without a turbocharged option available, it’s clear that Subaru’s trying to shed the last bit of quirkiness, the last bit of youthful abandon the Forester ever had. Instead, it’s now going for things like usability, safety, and everyday performance—boring adjectives, but ones that a typical family man would want. While these don’t sound like the sexiest features a Subaru would have, these are exactly what people want in a compact SUV. After all’s said and done, the 2019 Forester is now more confident of occupying a mainstream position, comfortable in its own skin now with qualities sought after by the Titos (and even Titas) of the world. It’s the Tito of compact SUVs, and proud of it.