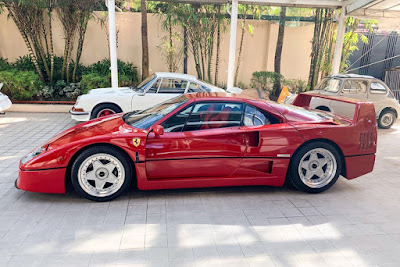 Every year, the Autoplus display always seems to grab the lion’s share of attention at the Manila International Auto Show (MIAS). For the 2019 installment, it won’t be different as Autoplus is set to wow the crowd with its display of iconic supercars.

The distributor of Motul oils and lubricants in the country will showcase the Ferrari F40—a mid-engined, rear-wheel drive built from 1987 to 1992. With only 1,315 units produced globally, this twin-turbo V8-powered limited-edition masterpiece will surely delight car enthusiast and show goers alike.

Besides the F40, Autoplus will also be displaying the Lotus Exige V6 Cup and McLaren 570S GT4—both fresh from Motul’s very own 300V Superfast Track Event.

The Lotus Exige V6 Cup is a race version of the Exige two-door sports car built by Lotus Cars since 2000. This track-oriented version first launched in 2012 has the same engine as that of the Exige S, but the V6 Cup differs in its bespoke exterior and interior trims which are more track-focused.

Meanwhile, the McLaren 570S GT4 is the track-oriented version of the 570S. Using a 3.8-liter twin-turbo V8, it makes 570 horsepower and 601 Nm of torque. Compared to the “regular” 570S, it has an air jack suspension system, center-lock magnesium wheels shod with Pirelli racing slicks, and a race-style cooling system.

The Autoplus pavilion is located inside the main hall. The Manila International Auto Show 2019 starts from Thursday, April 4 and runs until Sunday, April 7, 2019. Doors open at 10 AM.
at 1:20 PM