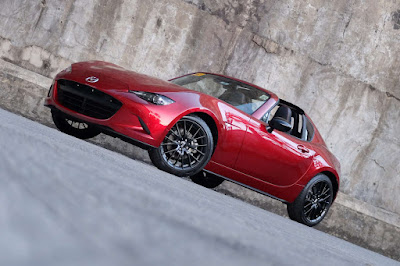 You would think all the MX-5 stories worth telling have already been told. Yes, it’s attention-grabbing (KODO). Yes, it’s a great drive (Jinba-Ittai). And yes, it now appeals to more than just middle-aged men and hair dressers (personal observation). But then, Mazda digs deep and comes up with the 2019 model. Though it doesn’t look that radically different (spoiler alert: it’s pretty much the same car), but that new engine, BBS wheels, Recaro seats, and the available Soul Red Crystal paint job? Hnnnnnnnggggg.

Signaling the most obvious difference this 2019, is the new Soul Red Crystal paint job for the MX-5. It’s not entirely new since it’s something everyone has seen on countless CX-5s and Mazda3s, but it’s just hella sexy on the MX-5. If this roadster were a lady, this sequined deep-toned red dress just fits her petite frame better. Oh, then there’s this way the red dress drapes over the top part of the interior, like she’s begging for a hooky (*wink* *wink*). Everything, oh everything would have been absolutely perfect if it were not for that darn reverse camera. What is that? An unsightly birthmark on her thighs. Ugh. Still, it’s largely forgivable; just don’t stare.

As always, the MX-5 isn’t forgiving for the well-endowed. If you’ve been neglecting your New Year’s Resolutions to get into shape, this car will bitch slap you back to reality. Oh, so you’ve been snacking on those cupcakes, eh? Okay, try squeezing your sugar baby between the seat bolsters and steering wheel now, MF. Well, alright, this here is the Club Edition so the Recaro seats do have thicker bolsters making ingress and egress a tad harder than in the standard MX-5. Still, this car isn’t forgiving. This red-dress wearing woman might as well be Jillian Michaels who’ll constantly remind you: oh, Mr. Obese Man, maybe you should deserve a car that’s wallowy as you are, like a Mustang.

Once you make it passed The Wall and into Westeros, the MX-5’s cabin remains pretty much the same as before. Compared to the standard seats, the Alcantara and leather Recaros do a better job of providing a warm embrace, befitting this car/sexy woman in a sequined red dress thing. She’s always holding you, supporting you, keeping you focused (or is it distracted) on the task at hand. There’s even a tilt/telescopic steering wheel this year too, but honestly, it’s overrated. It’s only there for people who’re supposed to be driving a Mustang (hello, Mr. Obese Man), but just wanted to dance with this girl. Oh, and don’t ask for any wiggle room too; she won’t let you have any. She prefers to cuddle tightly and she won’t let go. The interior clings and molds around you like a pair of skinny jeans. Either that, or perhaps you shouldn’t have had that cupcake.

In the seconds before you turn her on, the gauges glow like a heartbeat, hypnotically telling you to give in to your carnal desires. You push her (start/stop) button and she moans. The engine, admittedly, sounds the same as before, not even fainting a hint to the “extra service” she’ll offer. It’s throaty, even, confident. You press down on the throttle and she opens up. Brrrrrrrr. A slight gurgle. Brrrrrrrr. God, you miss this voice. Then, you press down on the throttle. More and more and more. The needle climbs up and then the shove. She obliges and doesn’t stop all the way to the 7,500 rpm. Damn girl, you’re hardcore now.

See, previously the MX-5 had 160 horsepower which is a great, even number. But any sportscar aficionado will tell you, more power is better. So, through some Mazda black magic, the engine’s now up to 184 horsepower. Interestingly, this figure is reached at 7,000 rpm—a full 1,000 rpm more than before. Even more interesting is that there’s no loss of tractability here at all. The secret is how this rev-happy engine is also tuned to deliver mid-range punch than the 2.0-liter Skyactiv-G before it. Peak torque? It’s actually got more and it’s delivered now at 600 rpm less. In short, this heart’s the one she’s been begging for the past three years. Oh, and for those counting, she consumes less calories too: 9.7 km/L versus 8.11 km/L in the old RF.

The extra power and higher redline are the only two missing pieces to the MX-5’s handling puzzle. With those put in place, the entire package is downright perfect from the telepathic steering to the communicative chassis. It’s always surprising how this plucky roadster embraces body roll, but she does it so beautifully well that it’s poetic. Every corner feels like a dance. She eases herself in a delicate, deliberate manner as opposed to simply letting you flog her through the bends. Oh, and the added bonus here is her supple ride. Yeah, baby, you can ride her all day (and night) long. Admittedly, it’s hard to tell the role the forged 17-inch BBS wheels play here, but regardless, there’s no other sportscar that feels as forgiving or enjoyable to drive through Manila’s pothole-ridden streets on a daily basis as this.

For those who plan to cover long distances, sadly, the 2019 MX-5 still omits cruise control, but the addition of Lane Departure Warning is good for those who’re easily distracted while driving. And don’t worry, if you prefer not to be nannied, the system’s tweakable and can even be turned off completely.

The fourth-generation MX-5, like its predecessors, are real heart-and-soul machines. Coming from where it was three years ago to where it is today, the 2019 edition definitely has more heart and more soul now. Despite the added power, it still remains divisive, especially if your idea of a sportscar is something that goes fast in a straight line and nothing more. But that’s not what the MX-5 is and will never be. Rather, it rewards those who prefer to dance intimately, perhaps with someone in a sequined red dress?