Apparently, Nissan's Not Shouting At You When They Spell Leaf as "LEAF" 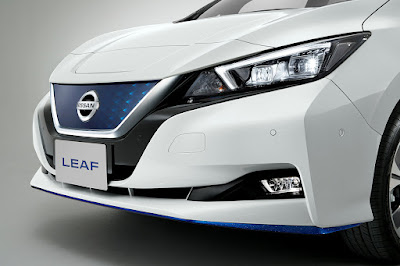 If you’ve been paying attention or at least glancing through a lot of Nissan news, chances are, you’ll notice that their all-electric vehicle, the Leaf, is always stylized as “LEAF.” While this sounds shouty to some keyboard warriors, there’s actually a reason Nissan’s spelling out the Leaf as the “LEAF.”

It turns out that the “LEAF” name is actually an acronym. LEAF actually stands for “Leading, Environmentally-friendly, Affordable Family vehicle.” It sure sounds like Japanized English, but if you think about it, Nissan’s actually come up with a very clever name.

It all goes back to why Nissan made the Leaf, or if you prefer, LEAF, and its overall design brief.

Let’s start with the most obvious letter, and that’s “E.” Unlike conventional automobiles, the LEAF is a zero-emissions vehicle powered by an electric motor with energy stored in lithium-ion batteries. The first-generation started with a modest 110 horsepower, 280 Nm motor and a 24-kWh battery pack while the new one has a 148 horsepower, 320 Nm motor and a 40-kWh pack. There’s even a LEAF e+ now, and that one has 217 horsepower, 340 Nm of torque electric motor hooked up to a 62-kWh battery.

Next, there’s the “F.” Unlike other EVs which have taken a more niche approach like a two-door sportscar or what not, Nissan opted for a more familiar shape: the family-oriented hatchback. The first-generation looked a bit dorky for sure, but the shape and size fits the bill for people who want a proper daily driver and it’s something it’s been carried over to the second-generation model. Subsequently, Nissan reduced the LEAF’s sci-fi appearance to make it more appealing to a wider set of buyers around the world. In other words, Nissan wants you to think that the LEAF doesn’t just appeal to the tree-hugger set; it can also be something you, the regular motorist, can enjoy driving around in.

Now, there’s the letter, “L.” While Tesla typically hogs the limelight when it comes to electric vehicles, the LEAF is actually the world’s best-selling all-electric vehicle. Since the first-generation model’s introduction in 2010, Nissan has sold over 400,000 of these EV hatchbacks, and that’s not all. The company says owners have driven a total of 10 billion kilometers (compared to Tesla’s 8 billion kilometers). Furthermore, the LEAF has also become a platform for Nissan’s autonomous driving ambitions. In the latest version, it comes with things like ProPILOT which is Level 2 Autonomous Driving. This means the LEAF can pretty much drive itself (steering, braking, accelerating) on the highway.

Finally, there’s the “A.” Based on its sticker price alone, the LEAF still isn’t the most affordable family hatchback out there since prices start at around USD 31,000 (~ P 1.635 million) and tops out at USD 44,000 (~ P 2.32 million). However, Nissan does counter that with a maintenance cost at 80 percent less compared to its internal combustion equivalent. It also saves you repeated trips to the pump and instead, draws power from a conventional 220-volt power outlet (there’s a fast-charge option, too, if you prefer). The cost for a full charge? Around P 460.42 or around a third of the cost to refuel a gas-powered hatchback.

There you have it. While the LEAF sounds like a cute and very appropriate name for Nissan’s EV, there’s actually a deeper meaning to it too. So next time, don’t be too upset at Nissan’s marketing department for spelling out, “LEAF” in all-caps—there’s actually a reason behind it.
at 7:00 AM