The Bugatti La Voiture Noire is a Billion-Peso Supercar 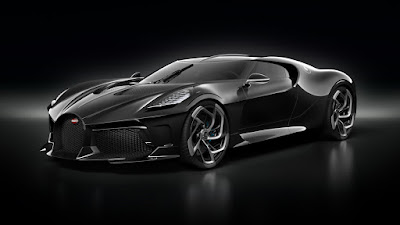 Last year, Pinoy boxer Manny Pacquiao made headlines when he bought a mansion in Forbes Park for a staggering USD 9 million (~ P 469 million). As astonishing as that amount was, it’s still not enough to get this one-of-one Bugatti La Voiture Noire. This is, after all, the most expensive new car ever.

Built as a tribute to the Type 57 SC Atlantic, the Bugatti La Voiture Noire is made to celebrate the French car brand’s 110th anniversary. It’s a handmade carbon fiber masterpiece that the carmaker calls, “the highest level of automotive haute couture one can reach.”

It’s still based off the bonkers Chiron hypercar, but designers have made everything look much more flowing, as if they were all made as one piece. Even the wheels and tires haven’t escaped attention and are made specifically for this car.

Bugatti hasn’t announced any performance figures for this one-off hypercar, but since it’s Chiron-based, it’s likely the quad-turbo W16’s 1,479-horsepower output remains intact. Zero to 100 km/h should be 2.4 seconds and the top speed is a blistering 420 km/h. One visual difference though is the number of tailpipes. Here, there are 6 pipes poking out the back, a tribute no doubt to the Type 57 SC Atlantic’s which also had 6.

Oh, if you need to ask, there are also some downsides to the La Voiture Noire. For one, there’s the miniscule trunk. Though Bugatti says it’s the “ideal grand tourer,” the cargo hold here is only 44 liters, or about the size of one backpack. Also, the fuel mileage is around 2.84 km/L in the city so expect to be-friend every gas station where you live.

While the sole example has already been sold to a mystery buyer, the price of the Bugatti La Voiture Noire is a cool USD 19 million or close to a billion pesos; or 2 Forbes Park mansions if you’re Manny Pacquiao.