Toyota's Going to the Moon 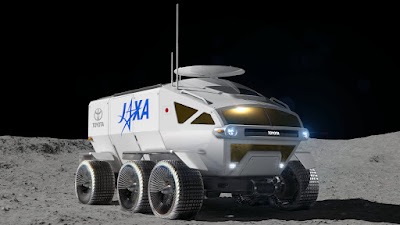 Soon, there will be a Toyota on the moon as the Japanese carmaker and the Japan Aerospace Exploration Agency (JAXA) announced a collaboration that’ll bring a manned, pressurized rover there. Toyota hopes to further its fuel cell electric vehicle technologies by equipping this manned rover with a cruising range of more than 10,000 kilometers.

The Toyota manned pressurized rover will be around 6 meters in length, 5.2 meters in width, and 3.8 meters in height or about the size of 2 Toyota Coasters. It’ll have a 13-square meter living space and will be capable of accommodating two people (four in an emergency).

For this part, Toyota President Akio Toyoda said: “The automotive industry has long done business with the concepts of ‘hometown’ and ‘home country’ largely in mind. However, from now on, in responding to such matters as environmental issues of global scale, the concept of ‘home planet’, from which all of us come, will become a very important concept. Going beyond the frameworks of countries or regions, I believe that our industry, which is constantly thinking about the role it should fulfill, shares the same aspirations of international space exploration. Furthermore, cars are used in all of Earth’s regions, and, in some regions, cars play active roles as partners for making sure that people come back alive. And I think that coming back alive is exactly what is needed in this project. I am extremely happy that, for this project, expectations have been placed on the thus-far developed durability and driving performance of Toyota vehicles and on our fuel cell environmental technologies.”

While JAXA and Toyota have been jointly exploring the concept of a manned, pressurized rover since May of last year, they believe that the earliest timeframe they can launch it would by 2029. It will support human lunar exploration in the 2030s.