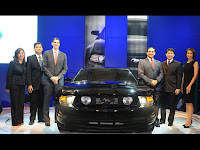 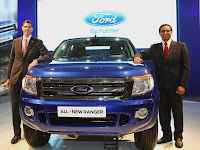 Ford Philippines today reported March retail sales of 623 units, an increase of 50 percent from the previous month, as vehicle supply from Thailand continued to improve.

The all-new Ford Fiesta led the March performance and reaffirmed its segment leadership by delivering its best-ever monthly sales of 392 units – an increase of 64 percent from February. Despite the lingering effects from the Thai floods on local supply, the class-leading Fiesta delivered overall first-quarter sales that rose slightly from the previous quarter to 774 units.

“The all-new Fiesta continues to prove its wide appeal among young and savvy consumers who appreciate its best-in-class package of design, safety, fuel economy, quality and value for money," said Randy Krieger, president, Ford Group Philippines. “Our fast-growing Fiesta customer base is incredibly loyal and enthusiastic, and they are certainly helping spread the excitement about this fantastic small car.”

The Ford Escape SUV turned in a strong March, with retail sales of 112 units, an increase of 56 percent from the previous month.

At the Manila International Auto Show last month, Ford underscored the reason for its confidence that momentum will continue to build this year by launching the all-new Ford Ranger pickup, the all-new Ford Explorer 2.0L GTDi with EcoBoost, and revealing the new Ford Mustang sports car.

Ford started taking orders at the Show for the all-new Ranger with the official public launch now expected in July.

“Combining the toughness and capability of a pickup truck with smart technology, outstanding safety, excellent fuel economy, quality and comfort, the all-new Ranger will redefine the pickup truck segment in the Philippines,” said Krieger.

Additionally, the all-new Explorer 3.5L Limited won 2011-2012 Car of the Year for ‘Best Luxury SUV’ at the Show, as well as the Bosch Technical Innovation Award for its award-winning MyFord Touch and SYNC global in-car connectivity systems.

“The all-new Explorer is fast-becoming one of our strongest vehicles in the Ford portfolio, and we are eager to sustain the momentum,” said Randy Krieger, president, Ford Group Philippines. “The success of this vehicle is further evidence we are delivering products that people want and value.”

The local reveal Ford Mustang turned out to be a show-stopper at MIAS, with enthusiasts eagerly receiving news that this super-charged vehicle will be officially launched in July, with first deliveries expected in September.

Ford also reaffirmed its plans to launch the all-new Ford Focus later this year, representing the next of the eight all-new vehicles Ford will introduce in ASEAN by mid-decade.

“With the arrival of so many great One Ford vehicles this year in the Philippines, there is no question that our sales performance will continue to strengthen through the year,” explained Krieger.