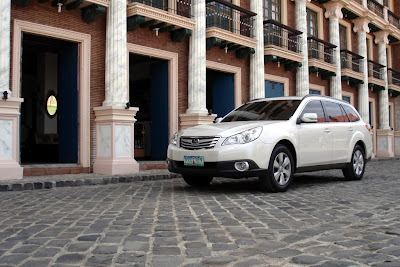 I consider traveling outside Metro Manila to be quite a chore. Though the promise of fresh air and endless expanse of greenery is welcoming indeed; to get there, you usually end up traversing terrible roads. And with only a low-slung hatchback in my garage, I have to contemplate whether the trip is worth the suspension damage I may suffer on the way. Needless to say, with the right car and the right destination, I’m willing to take on even a ten-hour driving challenge single-handedly. And though it didn’t take us ten hours, that’s exactly what happened when I recently took the Subaru Outback to Las Casas Filipinas de Acuzar in Bagac, Bataan.

Our timing was entirely coincidental, but it seemed appropriate that as the country’s celebrating Araw ng Kagitingan, we were about to visit the province that stood as the Philippines’s last stand during World War II. We were a group of ten split into three cars: a Toyota Corolla Altis, a Land Cruiser LC200 and a Subaru Outback. Oddly enough, throughout the entire journey we stayed in convoy in a small-medium-large arrangement, with the Outback acting as the meat in the Toyota sandwich.

Having driven the Outback two full days before the scheduled trip, I was already surprised at how different it behaved compared to the Legacy; even if these two vehicles are, for all intents and purposes, twins. While the Legacy provided all-out driving excitement, the Outback had a more laid-back tone to it. Despite having a larger engine (3.6 liters of displacement and six cylinders), the Outback was more at ease with cruising than winning stoplight duels. Nonetheless, the Legacy DNA is still there: it steers well and handles flawlessly. In addition, it rides softer and more comfortably too. It’s a perfect match for a long trip then.

Loaded with a gigantic cooler, snacks to feed an army and of course, four overnight bags, the Outback made its way to the Petron station in the North Expressway to meet with the rest of our group. However, due to some miscommunication, we found out that our lead car already made its way to our lunch venue in Angeles, the historic Camalig restaurant which was a restored Spanish rice granary. Though it doesn’t have any turbocharger, the Outback shares similar engine outputs to the Legacy: 260 horsepower (265 for the Legacy) and 350 Nm of torque. Resisting the need to switch the Outback’s SI-Drive from ‘Intelligent’ to ‘Sport’, I cruised through NLEX at legal speeds thanks to its cruise control.

As we entered Angeles City proper, it’s quite clear to me that the Outback had one great advantage compared to larger SUVs, like the Land Cruiser that was in convoy with us: the Subaru isn’t as wide. Given the narrow stature of our provincial roads, the Outback’s 1,820-mm width and excellent all-round visibility meant it can easily dodge tricycles and jeeps while the Land Cruiser got stuck a couple of times or had to carefully tiptoe its way through smaller traffic.

After lunch, the group then departed for Las Casas, but decided on a stopover at the Bataan War Memorial near Mt. Samal first. The journey through NLEX and SCTEX was smooth thanks to the newly constructed, world-class roads, but as we reached Bataan’s provincial highway, the roads turned choppy. Though four lanes wide in some areas (a rarity in our provinces), the pavement was purely broken concrete with only a dabble of asphalt holding the entire thing together. From Baesa to Mt. Samal, the Outback had to make its way through this kind of terrain. Once again, the higher ground clearance and softer suspension set-up were highly beneficial resulting in a worry-free and comfortable ride for everyone on-board. As the roads turned twisty near Mt. Samal, I switched the SI-Drive to ‘Sport’ giving the Outback a much more direct, more aggressive feel as we swept up and down the mountainous roads. As we reached the gates of Las Casas, a guard dressed in Katipunero garb greeted us. Parking the Outback, I was amazed it still had more than half a tank, considering I haven’t filled it up since I got it at Motor Image’s EDSA Showroom two days ago. 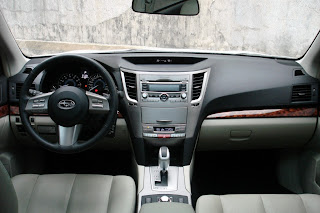 Strolling through Las Casas Filipinas de Acuzar (no cars are allowed in the plaza square) felt like a trip back through time—to the 18th and 19th century Philippines to be exact. All the houses here (sans the hotel) have been painstakingly relocated from their original locations to Bagac, Bataan brick by brick, plank by plank. The structures here are at least a century old and as a result, felt like a true Hispanic settlement trapped in time. With its cobblestone paved roads and period-dressed staff, Las Casas felt like a living museum. What’s more, you don’t just stare at these magnificent period structures; you can get to stay in them too. And that’s exactly what our group did.

Las Casas offers the rustic charm of Hispanic-era Philippines while providing modern amenities and facilities. Though some people may balk at the idea, I like it as each of these colonial houses has air conditioning, modern plumping and flat-screen televisions with satellite reception. Surprisingly, there’s a strong mobile phone signal here too. Of course, if you want to pass the time in a period correct manner, Las Casas offers traditional Filipino games like tumbang preso and patintero as well as seminars in cigar rolling, cultural dancing and historical architectural tours. As day faded into night, the paseo transforms into a stage, where performers showcase traditional Filipino folk dance and song. Though there’s a restaurant within the village, I hope you like Filipino/Spanish, since it’s the only choice you’ll get here.

The next day, we decided to break convoy for our drive back to Manila, intending to meet up at C’s in Angeles for Lunch. As the Land Cruiser and Corolla Altis departed 30 minutes before the Outback did (we had to handle the group’s incidentals), there was some ground to make up. Again, it proved no sweat for the Outback. Set to ‘Sport Sharp’, the Outback had the ability to overtake just about anything on the road, without posing any danger to my passengers. As the Subaru climbed the area around Mt. Samal again, the Outback displayed its only weakness: the soft-sprung suspension meant there’s noticeable body roll. Though not as bad as other traditional SUVs or crossovers, it required much more steering movement to get into corners compared to the Bilstein shock absorber equipped Legacy. Nonetheless, after a couple of turns, I was well adjusted already and soon caught up to the other two cars on the SCTEX.

A couple of panizzas, pastas and Italian sodas later, it was time for the group to part ways. As the Subaru Outback reached the outskirts of Valenzuela, it’s amazing how I didn’t have to refuel it the entire time. Despite its large engine displacement, I managed 10 km/L in my combined city and highway driving. Combined with its large, 65-liter fuel tank, the Outback can theoretically go 650 kilometers without stopping. Not bad.

Admittedly, I’m the type of person who’d rather go to Hong Kong or Singapore than embark on a trip somewhere in the Philippines; culture and heritage be damned. But, after this stellar experience in Las Casas Filipinas de Acuzar and the trip behind the wheel of the Subaru Outback, I’m pretty certain I’ll be doing this again. It just takes the right destination and the right car to make me appreciate the beauty of what our country has to offer.
at 8:00 AM