When you’re promising to “start more than a car” you know you’re in for a treat. After seeing it as a concept at the North American International Auto Show in Detroit three years ago, the all-new Ford Focus has finally broken ground for the ASEAN market as a full-fledged production model ready to take to the streets later this year. With the all-new Focus, Ford has once again strived to leapfrog the competition in every conceivable aspect from quality to fuel-efficiency to safety and smart technology. And clearly, they have succeeded.

Developed as part of the company’s ONE Ford strategy, the all-new Focus has taken advantage of shared resources and economies of scale to deliver a compact car that’s brimming with technology most of which hasn’t been seen in the competition, let alone the Philippine automotive market altogether. Technologies such as Active Park Assist, Active City Stop, Blind Spot Information System and Smart Keyless Entry will be available equipment for the Focus.


From the outside, the Focus takes Ford’s acclaimed “kinetic design” form language to the next level—it’s striking with its sleek profile, dramatic rising belt line and athletic stance. The dynamic shape also contributes to a low co-efficient of drag and together with Active Grille Shutters that automatically control airflow through the grille; improves the Focus’s fuel efficiency while reducing wind noise. 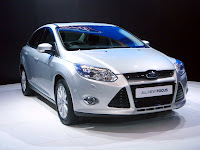 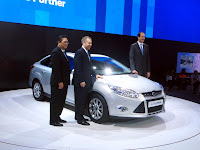 Underneath the shapely body is an all-new global C-car platform in which Ford promises to deliver a more comfortable, more refined driving experience without sacrificing the sharp handling and driver-centric experience the Focus is renowned for. Ford engineers have taken great care to achieve a much more rigid body structure by employing high-strength steel in 55 percent of its body. As a result, the all-new Focus is 30 percent more rigid than the outgoing model delivering class-leading noise, harshness and vibration insulation. Additionally, the electric power steering has also been retuned to deliver a more precise, more linear response in any given driving situation.

Together with the revised steering and more rigid body, the Focus introduces a new Torque Vectoring Control system which essentially acts as a limited slip differential balancing the distribution of power between the front driven wheels. This results in reduced understeer, improved traction and better turn-in during cornering. This technology has, up to now, typically only been available on premium sports car, is standard equipment on the all-new Focus.

At launch, the Focus will be available with two engines, both of which promise excellent fuel economy and power. First up is an all-new 2.0-liter Duratec petrol engine with twin independent variable camshaft timing and direct injection. Delivering 170 horsepower and 200 Nm of torque, this engine boasts almost 20 percent more power than the previous 2.0 lump while delivering significant improvements in fuel economy. The second engine is a 1.6-liter Duratec also equipped with twin variable camshaft timing. In this iteration, it serves up 125 horsepower and 159 Nm of torque while also returning outstanding fuel economy. Future engine choices for the Focus reportedly includes either a 1.6- or 2.0-liter engine equipped with EcoBoost—a term which unifies turbocharging and gasoline direct-injection technology. 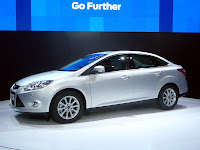 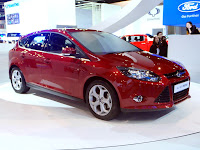 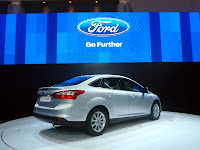 The 2.0-liter engine is mated to Ford’s latest version of its six-speed PowerShift dual clutch automatic transmission. In the 2.0-liter variant, the transmission system is equipped with SelectShift which allows the driver to control the gear selection manually via buttons on the shift lever. Meanwhile, the 1.6-liter engine is available with either the six-speed PowerShift or a more conventional 5-speed manual gearbox.

As fast and furious as the new Focus looks to be, it also boasts of being one smart car. Leading the way is Ford SYNC which provides hands-free, voice-activated in-car connectivity. Once reserved for the likes of the Explorer and Expedition models, this award-winning system allows the Focus to connect to almost any mobile phone or digital media player via Bluetooth or USB. It then allows the driver to make calls, play his or her favorite tune via 150 different voice commands or through the steering wheel mounted controls. The Ford SYNC system is also upgradable allowing the Focus to take on future mobile phone models and media players when the need arises.

Aside from Ford SYNC, the Focus also offers an array of never before seen technology. With Active Park Assist, the Focus can parallel park itself totally hands-free using sensors around the car to identify a suitable parking spot then steer the car into place. Thanks to Active City Stop, the Focus can also monitor the road ahead for stationary traffic and then apply the brakes automatically if the sensors detect if the car in front has stopped unexpectedly. The Blind Spot Information System or BLIS, can detect when a vehicle enters the Focus’s blind spot and then issue a corresponding warning be it when changing lanes or parking with limited visibility. Lastly, the Smart Keyless Entry with Ford Power Start allows the driver to lock or unlock the doors and start the Focus without taking the key out of a bag or pocket. It can also lock or unlock the doors by the mere presence of the key fob.

Other available features on the all-new Focus include dual-zone climate control, a 9-spekaer Sony entertainment system, rain-sensing wipers, cruise control, a powered sun roof, an auto-dimming rear view mirror among a lost of many others.

Built at the new USD 450-million Ford Thailand Manufacturing (FTM) plant in Rayong, Thailand, the all-new Focus promises to set a new standard in build quality and craftsmanship. For instance, the body undergoes a new painting process called Three-Wet Paint Process which applies primer, base, and clear coat all in one go allowing for deeper, fuller and more consistent colors. Inside, the Focus is filled with soft-touch materials and superior trim materials including brushed aluminum accents and leather that covers the sculpted cockpit.

Ford has continuously raised the bar with its Fiesta, Explorer and Ranger. With the all-new Focus set to arrive in Philippine shores by the second half of the year, it looks like they’re going to continue to do just that. Indeed, the all-new Ford Focus is set to deliver class-leading looks, performance, and smart technology to the masses. This will most definitely start a revolution and all it takes is just a push of that start button.
at 8:30 AM