What to Expect When You're Expecting: Ford Explorer 2.0 EcoBoost

The all-new Ford Explorer with the 2.0 EcoBoost engine is still a full three months away, but we’ve been lucky enough to have sampled, by all intents and purposes, the entry-level Explorer. Of course, the P 2.350-million price tag is anything but entry-level, but it still saves you something like P 200,000 compared to the V6. However, as with anything that’s more affordable, expect the Explorer experience to be diluted. The question is, by how much? The Ford Explorer V6 has raised the bar quite a bit by providing excellent driving manners and numerous creature features at a truly competitive price. So, how will its little brother, the 2.0 EcoBoost fair? Without passing judgement (that will come at a later time), here’s what you can expect from the Explorer V6’s little brother.

At a glance, the most obvious difference with the Explorer EcoBoost is found in the grille, side mirrors and alloys. The V6 has body-color matching grille and side mirrors while the EcoBoost has a high-luster silver grille and black side mirrors. The EcoBoost also rides on smaller 245/60 R 18 shoes while the V6 has standard 255/50 R 20’s, though it’s worth noting that the 18’s are Michelin while the 20’s are Hankook. Inside, the Explorer EcoBoost is equally discontented with features such as the two-panel sunroof, premium Sony speaker system, keyless engine start/stop, power adjustable pedals, power folding third row, cooled front seats with memory shown the door. Even the chrome door sill trim has been replaced by a black resin plastic that reads, “Explorer”.

But despite the reduction in the luxury trimmings, the Explorer EcoBoost does manage to retain Ford’s crowning on-board technological achievement: the MyFord Touch with SYNC infotainment system. This means the Explorer EcoBoost retains the V6’s myriad of audio input options including full Apple iPod capability and Bluetooth connectivity. In fact, the Explorer EcoBoost is the first one to have Version 2.0 of MyFord Touch with improved response times, bigger icons and fonts, and improvements to the voice command feature. Even the center stack has been modified to reflect consumer response to MyFord Touch and it adds more shortcuts and physical buttons to by-pass the love-it-or-hate-it touch screen interface. Aside from MyFord Touch, the Explorer EcoBoost retains the seven-seater layout though the third row is now manually folding and requires a three-step process to fold flat as opposed to the single button affair in the V6 (the front seats are still powered though). 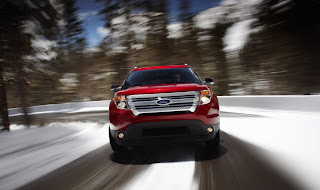 Although there are changes aesthetically, the biggest difference of the Explorer EcoBoost is found in the engine bay. The EcoBoost drops 1.5 liters of displacement and two cylinders compared to the original model. As a result, the entry-level Explorer is powered by a 2.0-liter four-cylinder engine. Putting a small engine into a full-sized crossover may sound crazy, but Ford has found a way to boost the inline-4’s output by employing direct injection and turbocharging. All in all, the performance should remain the same as the V6 as the power outputs are very close (290 horsepower with the V6, 237 for the EcoBoost) with up to 20 percent better fuel economy for the four-cylinder model. Mated to this engine is the same six-speed automatic found in the bigger engined Explorer though the EcoBoost doesn’t have the SelectShift +/- manual override.

Since Ford is positioning the 2.0 EcoBoost as an entry-level model next to the V6, the all-wheel drive system is nowhere to be found and neither is the fancy Terrain Management System and its driver-selectable control knob. In fact, the Explorer EcoBoost drives the front wheels solely. This should be sufficient to 99.5 percent of Explorer owners who don’t or will never go anywhere remotely muddy. That said, because the Explorer EcoBoost still has Traction Control, Hill Descent Control and Hill Start Assist it’s still a safe bet for those “hairier situations”.

In fact, the Explorer EcoBoost doesn’t take a backseat when it comes to safety—it’s just as loaded as the V6. It comes fully loaded with six airbags, anti-lock brakes with electronic brake force distribution and brake assist. The Explorer EcoBoost even retains the rear parking sensors with camera for ease of parking. Even more surprisingly is that the Explorer EcoBoost has something which the V6 doesn’t: the world’s first inflatable second row seat belts. This system is essentially airbags built into the outboard second row seat belts that provide additional protection to rear passengers, especially children. 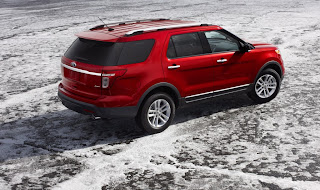 At this point, it should be very clear that despite being labeled as the entry-level model, the Explorer EcoBoost manages to retain the very same character, the very same ingredients that made the Explorer V6 such a big critical and sales success. It’s tempting to say how the EcoBoost configuration has made an awesome crossover even more awesome, but that’s for another story. Here and now, let’s be very clear: Ford has managed to give us an entry-level Explorer model that’s in no way diluted. It is every bit as delicious as the original flavor V6.
at 7:00 AM