“As the Philippine economic landscape continues to move from good to great, so does consumer confidence and Hyundai’s outstanding sales performance for Q1. We are optimistic that this trend will extend into Q2, with the Elantra making waves as Car of the Year for 2012, the launch of the new Hyundai EON, and our consistent brand promotion efforts.”
-- Ma. Fe Perez-Agudo, HARI President and CEO

Hyundai Asia Resources, Inc. (HARI) closes the first quarter with a strong 44% growth in total sales, or 6,767 units sold from January 2012 to March 2012, compared to the 4,712 units sold in the same period last year. The boost in performance is due to the strong sales of passenger car (PC) models such as the i10, Accent and the Elantra, which drove a 127% increase for the first three months of the year to 4,297 units sold. New models, that is one-year-old and below, in both PC and LCV categories contributed to the increase. For the month of March alone, total PC sales rose to 159% with 1,316 units sold compared to 509 in March 2011. With PC sales’ notable increase in sales, total Hyundai vehicle sales climbed by 37% in March 2012 compared to the same month last year.

According to the Bangko Sentral ng Pilipinas (BSP) Consumer Expecations Survey, with Filipino consumer expectations looking up, consumer demand is expected to remain strong. Respondents perceived this quarter and the ahead as a favorable for purchasing consumer durables. Other key influences which underpin a more positive outlook are availability of jobs, increases in salary, good governance policies, steady investment inflows, appreciation of the peso and remittances from overseas workers. 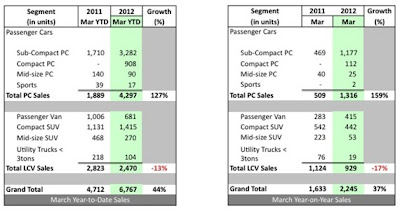 With source from: Asian Development Bank
at 6:00 AM