Clearly, Ford Group Philippines is capitalizing the fact that it's got the biggest area at the Manila International Auto Show (more than 1,000 square meters) to debut a slew of new models for the Philippine market. Already making its debut at the Ford Club of the Philippines Anniversary last month, the Fiesta family has grown with the public debut of the new Fiesta Sport Plus hatchback and Fiesta 1.4 Trend which is now available in both 4-door and 5-door automatic transmission variants. Meanwhile, the most significant news for Ford is the Philippine market introduction of the all-new Ranger pick-up truck.


Designed from the ground-up as a world-class, game-changing pick-up truck, the all-new Ranger is now finally available for orders with deliveries starting in July of this year. At its presentation at MIAS, Ford has announced the Ranger's pricing which is both startling and surprising: P 1,069,000 for the 4x2 XLT M/T and P 1,119,000 for the 4x2 XLT A/T. Both of these models are considerably loaded with features for the price including a full-featured audio system with Bluetooth hands-free and voice-command, class-leading 800-mm of water wading depth and a complete set of safety equipment including dual SRS airbags and anti-lock brakes. Both models are powered by an all-new 2.2-liter DuraTorq engine with 150 horsepower and 350 Nm of torque. There is also a fleet-oriented 4x4 model dubbed the XL with a 4x4 drivetrain which retails for P 1,179,000. Meanwhile, according to Ford, the much-awaited 3.2-liter model (in Wildtrak guise) will arrive in the Philippines much later.

Also at Ford's massive stand is the new Explorer 2.0 GTDi with EcoBoost. This new Explorer promises 20 percent better fuel economy without any sacrifices in power felt in the 3.5-liter V6 model thanks to the downsized engine as well as the removal of the all-wheel drive system. Outside, the Explorer 2.0 GTDi can be distinguished from its AWD brother because of its smaller 18-inch wheels, high-gloss silver grille and black side mirrors. Inside, the 2.0 GTDi debuts Ford's new second-row inflatable seat belts. The 2.0 GTDi still has the 3.5-liter V6's MyFord Touch with SYNC though the power-folding third row seats and powered tail gate have been removed. The Explorer 2.0 GTDi with EcoBoost retails for P 2,250,000. Meanwhile, the Explorer 3.5 V6 Limited will get a price bump (and more features) later in the year. 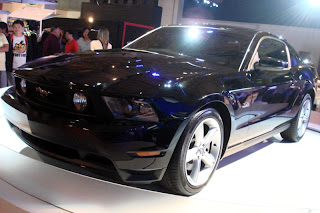 Though the Ranger is the most significant car on display at the MIAS stand, the biggest surprise (and biggest crowd drawer) is the Philippine teaser of the all-new 2013 Ford Mustang. A long time coming (and almost an urban legend), the Mustang is now finally available for Philippine consumers. Final pricing and specifications still aren't final, but Ford does say that it will be available by September of this year. In the mean time, potential buyers and show goers can cast their vote on which Mustang model they'd like to see here by participating in a Mustang survey at the Ford pavilion.
at 10:00 AM