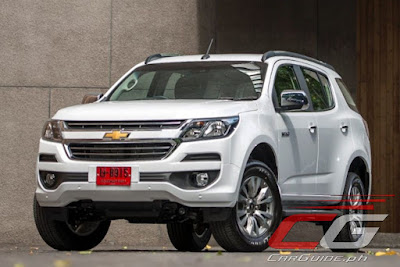 After showing it off as a Concept at the 2016 Bangkok International Motor Show, Chevrolet has finally taken the wraps off the production version of the Trailblazer at yet another motor show in Thailand. At the BIG Motor Sale 2016, Chevrolet has announced the sale start of the 2017 Trailblazer in the Land of Smiles.

Speaking at the launch, Wail Farghaly, Managing Director of GM and Chevrolet Sales Thailand, said, “The all-new Trailblazer not just underlines our focus on trucks and SUVs in Thailand, but is proof of our commitment to bring the best SUVs to our Thai customers. It is truly a premium product, and will cement our position in the SUV segment.”

Outside, the 2017 Trailblazer features a heavily revised front-end styling that ties it to the revised Colorado. In turn, the Colorado takes on a front fascia that’s close to that of its American market counterpart. As such, Chevrolet is now positioning the Trailblazer as a premium mid-sized SUV with American origins.

Echoing the refreshed exterior, the interior has been improved with better materials, fit, and finish. It also gets a host of new features such as a remote start function and Apple CarPlay with Siri Hands-Free.

In Thailand, the Trailblazer is powered by sole engine: a new 2.5-liter Duramax diesel engine that generates 180 horsepower at 3,600 rpm and 440 Nm of torque from as low as 2,000 rpm. Shared with the refreshed Colorado, this engine is Euro-4 compliant and features a variable geometry turbo. It also has improved NVH thanks primarily to sound deadeners around the injector system. The transmission remains a 6-speed automatic unit.

The new mill aside, the 2017 Trailblazer also gains an Electric Power Steering (EPS) system for improved fuel efficiency and ease of use, especially in low-speed maneuvering. The same system also provides a more weighty feel and improved stability at higher speeds.

Philippine fans won’t need to wait for long to get their hands on the 2017 Chevrolet Trailblazer. Chevrolet Philippines has confirmed that the Philippine market launch is slated for some time next month with start of deliveries to start soon thereafter.
at 11:57 PM

Email ThisBlogThis!Share to TwitterShare to FacebookShare to Pinterest
Filed Under: Chevrolet Trailblazer, News