Honda Unveils Civic Hatchback and It Could Arrive in the Philippines 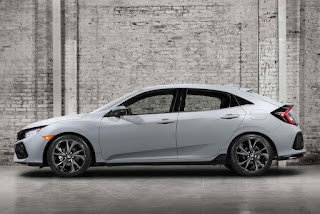 There’s no denying that Honda got its A-Game back with the all-new Civic. After driving both the RS Turbo and the 1.8 E, the venerable compact sedan is back to its sporty ways. And now, the sporty treatment comes full circle with the reveal of a hatchback version. Revealed for the North American market, it’s also been confirmed that the Thailand plant will also be producing the five-door version as well.

Built on the same platform that underpins the Civic Sedan (and the  Coupe for the North American market), the Civic hatchback is jointly developed by Honda R&D teams in both Europe and Japan. The unmistakable sporty lines translate very well on the five-door variant giving the Civic hatchback a well-toned and muscular appearance. Backing up the striking looks is the segment’s best rear legroom and largest cargo capacity in terms of volume.

Of course, this car won’t be a Civic without touching on the performance aspect and on that end, Honda obliges with the 1.5-liter turbocharged 4-cylinder engine. Shared with the Civic sedan, this Earth Dreams engine peaks out at 174 horsepower and 216 Nm of torque. Meanwhile, a high-flow center exhaust on the Sport models increases the output to 180 horsepower and 216 Nm of torque. And the best bit of news is that the turbo motor is now available with a 6-speed manual transmission alongside the regular CVT.

The advanced powertrain is backed up by a rigid, lightweight body, sophisticated chassis design with full independent suspension with liquid-filled bushings, and a sport-tuned electric power steering with variable ratios.

Honda engineers think so highly of the new Civic Hatchback’s potential that it’s going to form the basis of a “radical” Type-R version that’s launching as a global model come 2017.

According to automotive blog, PaulTan.org via Car Advice, the all-new Civic Hatchback will be built alongside the sedan version at the company’s Thailand assembly plant. Currently destined for the Australian market, where there’s also a free trade agreement in place, it could certainly open up the possibility of seeing this on Philippine roads as well.

Examining the current 2016 Honda Civic line-up, where there are only two variants, the 1.8 E and RS Turbo, it makes sense for Honda Cars Philippines to beef up their line-up with the hatchback to fill in the sizeable price gap between the P 1,088,000 entry-level model and P 1,398,000 range-topper.

That being said, the ASEAN Civic Hatchback will likely come powered by both the 1.5-liter turbo and 1.8-liter normally aspirated motor. Perhaps they’ll take a page off Mazda’s pricing strategy for the Mazda3 where the model ladder alternates between the sedan and hatchback.

Email ThisBlogThis!Share to TwitterShare to FacebookShare to Pinterest
Filed Under: Honda Civic, News