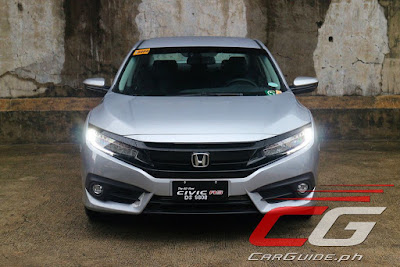 There’s a lot at stake with the all-new Honda Civic. With the hype saying that it’s “reborn”; this is the clearest indicator whether or not Honda, as a company, is heading in the right direction. Though Honda has expanded their line-up of late, the Civic remains their barometer. It’s their Big Mac, their Frappuccino, their “TM” next to the company name. Will the Civic do Soichiro Honda proud or will it have him turning in his grave?

Mr. Honda has nothing to worry about. He’s probably beaming a huge smile as he strokes his Earth Dreams harp with the angels and cherubims in the Temple of VTEC. Just a block from Honda’s office in BGC, the Civic is managing to catch the attention of every motorist. Everyone is doing double-takes, wondering who the lucky bastard is in the tintless RS Turbo. At first, your ego kicks into overdrive thinking all that attention is because you’re ridiculously good looking. That’s when you catch a glimpse of your reflection and it hits you: dammit, it’s because the car’s ridiculously good looking.

Loyalists will still say how the EK-series looks more like a modern classic, but the all-new Civic is every bit a class act. It’s a stunner from every angle: sleek, sporty, sweptback. Sure, the proportions have grown a lot, something reiterated when you park it next to an old Accord. However, designers have worked to dial up the aggressiveness and plant the stance. The overall vibe is youthful and techie, something seen in all of the detail work peppered around.

At night, the Civic is even more of a stunner. The full LED headlight cluster casts an unmistakable bluish-white light while the rear C-shaped tail lights with their light pipe design provide an interesting exclamation point. Interestingly, the Civic’s headlights don’t throw a long and wide enough beam of light. Even with the front fog lights on, it suffers from poor nighttime visibility—a shock given the complexity of the headlight’s design and the fact that this particular unit doesn’t even have tint.

Moving along, that youthful vibe is carried on inside where the seating position is actually quite low with the legs spread out. There’s a wide range of movement for all the driving controls available, but even at the highest setting, the feeling is more akin to that of a CR-Z. That’s not to say the visibility is compromised. On the contrary, the sight lines are typical Honda: clear and free from blind spots. The large windshield and wide side mirrors are particularly effective in darting through traffic or maneuvering through tight quarters.

The gauges are pretty much the best thing in the new Civic. Ditching the two-tier instrument cluster, the new layout is fuss-free and easy to understand. Granted there’s a noticeable delay when switching through menus, but it makes up for it with crisp, clear graphics. The same can be said with the touchscreen infotainment system: it’s full-featured but not as snappy as you’d expect. Still, this is the first one in its class to offer both Apple Car Play and Android Auto as standard, so there.

Apart from feeling like a proper driver’s car for the first time in decades, the Civic doesn’t skimp in the practicality aspect too. First up, the fit and finish are noticeably better than ever before. There are still some hard plastics here and there, but the overall feel has certainly gone up and it shows in places like the realistic looking aluminum trim and well-damped controls. Next, it’s roomier and larger for all five occupants who happen to also get their own adjustable headrests and three-point seatbelts. Finally, there’s a ton of space for stuff from the two-tier center bin (with an ingenious cable pass-through), the deep, flexible arm rest console, and the 60/40 split-folding rear seats. And speaking of trunk space, it can swallow two full-sized luggage with room to spare for carry-ons before needing to drop the seats.

With the Civic already winning in terms of outright space and packaging, it seals the deal with its on-road behavior. Starting it up is already subject to some fanfare. Depressing the brake pedal, the ‘Engine Start’ button glows white and pressing it brings the turbocharged 1.5-liter motor to life. While that’s happening, the instruments perform an intricate digital dance before everything settles down, ready for action.

With a healthy 173 horsepower, 216 Nm of torque output, the RS Turbo is considered to be the venerable SiR’s spiritual successor, and to some degree, it is. Floor the gas, and it’ll give one hell of a shove, growling all the way to its red line. Taken as a whole though, it’s more than just a pocket rocket; it’s more mature and grown-up. In urban confines, the Earth Dreams engine shows off its smoothness and tractability. Combined with the CVT gearbox, it’s easily a comfortable traffic crawler. As traffic lightens up, it turns into an eager performer thanks to minimal turbo lag. The gearbox does take a split-second to adjust its ratios when pushed, but once it hits its stride, it jives well with the engine. This new powertrain configuration also results in reasonable fuel consumption figures:  7.73 km/L in the city (average speed 11 km/h) and up to 21.30 km/L on the highway (average speed 71 km/h).

Apart from being great in a straight line, the Civic is also much more fun to toss around corners this time. The steering is light and linear. The quick 2.2 turns lock-to-lock enable it to rotate brisky, while the suspension itself makes it feel planted and secure. The driving feel is more cold-hearted clinical than warm-blooded emotional, but at least it’s progressive. It allows the driver to feel when he can push or dial back; not once did it feel like it was going to lose control. There’s a bit of body lean built in, but it doesn’t deter from any of the driving experience. The brakes are also very good, with excellent bite and pedal modulation.

Even more surprising is how the ride doesn’t seem affected by the sharp handling. Even on delivery tire pressure (45 PSI all around), the ride is plush and almost nothing, but sharp roads cuts can unsettle it. Finally, some people have concerns with the Civic’s low ground clearance, but don’t let that fact fool you. After a week’s worth of driving through steep driveways and tall humps, it didn’t scrape even once.

Priced at P 1,398,000, the Civic RS Turbo is not only the most expensive compact car available today, but it’s also caught in the middle of the compact crossover foray. This may not make the Civic, especially in RS Turbo trim the go-to-choice any longer. Still, for those who are aligned to Soichiro Honda’s principles of spirited driving, technology, and fuel economy, the all-new Civic delivers on all these fronts. It’s not as emotionally engaging, but it’s nonetheless a technical tour-de-force. It’s surely the best Civic to come out of the Honda stable in decades.