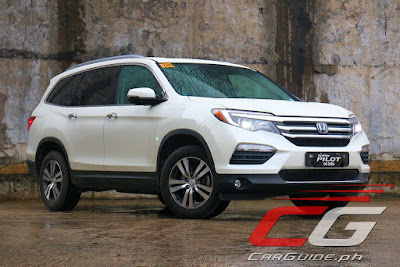 At a glance, it’s hard to position the 2016 Honda Pilot. At P 3,380,000, the sole EX-L variant is around a Brio’s worth of pesos more than its most expensive rival, the Ford Explorer Sport. Yet, the Honda’s spec sheet looks a tad pedestrian compared to the Ford’s Trump Card worthy one: 284 versus 370 horsepower, 353 versus 475 Nm of torque. It’s looking very much like a lopsided win for the Blue Oval until you spend some seat time in the Pilot. This isn’t Ulysses Ang versus Michael Phelps in the swimming pool; this is more like Neil deGrasse Tyson going against 50 Cent in a game of Jeopardy. And in this case, the Pilot’s not playing the role of gangsta-rapper.

For all intents and purposes, the Explorer happily plays the part of being the bling-king: 20-inch alloy wheels, “murdered out” chrome accents, a squatted down stance—you swear, the only thing lacking is the lowrider suspension and it’ll start shouting, “Wazzup!” It’s for this very reason that it’s become very attractive to would-be buyers. On the other hand, the Pilot values modesty. It’s the one you take to the Polo Club because you don’t want to grab attention. It’s Suburbia America all packed in a 4,941 x 2,296 x 1,773 millimeter frame. But that’s not to say the Pilot’s a particularly pretty SUV. On the contrary, the CR-V derived styling looks decisively out of whack when blown-up. The hood is too short, the passenger compartment too large, and the beltline too low. Even the 18-inch wheels look to small for the Pilot’s girth.

So while the Ford wins convincingly in the exterior styling department with a grille-inducing smile (it’s platinum, ‘yo), the Honda’s unsexy styling gives it a tremendous edge inside. Remember the Neil deGrasse Tyson reference? Well, the Explorer’s about to get served when it comes to interior smarts. The Pilot is home to soft-touch plastics, quality leather, and the segment’s best ergonomics. And it starts from the moment you climb aboard. Front or back, the Pilot has the best entry in the business—that large passenger compartment paying huge dividends: no banged heads, no unnecessary knee squeezing. Then the seats, in any row, are broad and wide, perfect for crawling on EDSA or tackling a long distance drive. Access to the third row is very easy with a single press mechanism that tilts and slides the second row forward. And upon sitting inside, the third row deserves an honorable mention because it can genuinely seat three adults with knee and shoulder room to spare.

Settling inside, it’s noticeable that Honda paid close attention to gift the Pilot with a great interior. With the exception of the faux stitching on the dashboard (it’s just plastic), everything feels top notch. The stalks, switches, and buttons (even the touchscreen beep) have an unmistakable quality to them. Apart from the well-damped controls, designers have managed to hide every screw and hinge—something that can’t be said with the Explorer. This SUV has clearly gone to charm school and has come out prim and proper.

Front and center to the driver is a rather peculiar-looking instrument cluster that combines both traditional analog and digital displays to great effect. It looks counterintuitive at first, but feels natural when trying to read information at a glance. The speedometer is completely digital located on the top part of the cluster while the tachometer and fuel/temperature gauges sandwiches a multi-information display. This LCD screen shows off all other information from trip to tire pressure, compass, and even the setting of the Intelligent Traction Management system. At the center console, the 8-inch display looks sharper and has snappier, easy to navigate menus thanks to its Android operating system (sadly, no built in navigation).

The Pilot isn’t exactly going to light up the drag strip Dominic Toretto style and it very well shouldn’t since life isn’t all about the quarter mile, especially for a family-oriented SUV. Unlike the rapper-friendly Explorer which boasts performance figures worthy of a drive-by-shooting getaway vehicle, the Pilot simply exudes confidence and refinement. Still boasting a 3.5-liter V6 upfront, the new mill comes with all sorts of technology that’s supposed to boost fuel efficiency and refinement such as variable cylinder management, direct injection, and active engine mounts. Though the resulting economy is still questionable: 4.53 km/L in the city (average speed 13 km/h), 13.58 km/L on the highway (average speed 56 km/h), and 6.42 km/L mixed (average speed 18 km/h), there’s no denying the feeling of potency. There’s ample power throughout the rev range (even with Eco mode on) plus the throttle engagement is sharp, responsive, and easy to modulate. It’s also quite refined—quiet when cruising, sonorous at higher revs.

Paired with this Frank Sinatra of an engine is a six-speed automatic. Though responsive, it emphasizes smooth shifts over anything else. Sadly, there’s a missed opportunity here because the Pilot doesn’t come with any sort of paddle shifters or manual override. This would have been very welcome on steep, hilly inclines like Kenon Road.

Power is transferred onto the pavement through Honda’s new Intelligent Variable Torque Management System. It combines a torque vectoring all-wheel drive system with an electronically-controlled rear differential which should give the Pilot surefooted manners whatever the condition. Though it seems fine on flat, dry pavement, it takes a moment for the power to come down smoothly on wet or low grip surfaces. Nonetheless, it remains positively stable.

Despite the size, driving the Pilot is way easier than anything else in this size range, Explorer and even Everest included. From the driver’s seat, the feel is very close to that of the Accord. The sight lines, especially the front corners, are all good and there’s no noticeable blind spot anywhere. Besides, if there was something there, blind spot warning indicators will let out a warning. The steering is light, but thanks to a 16:1 ratio, it’s responsive. However, because the suspension itself is soft and portly, minute corrections are necessary when pushed. Nonetheless, it’s exactly what you’d expect an SUV like this to drive like. It’s safe, predictable, and agile as it needs to be. Far more important to the potential customer is how the Pilot rides. It’s easily the plushest SUV in its class soaking up everything in its path. It easily trumps the Explorer, especially in mitigating sharp, undulating cracks; clearly those 18-inch tires with generous sidewalls play positive role here.

The hefty price increase does equate to better specs compared to the previous-generation Pilot. There’s certainly a lot to talk about from the leather seats, DVD entertainment system, and so forth; but the biggest news is Honda Sensing: the comprehensive suite of driver aids that help keep the Pilot pointed in the right direction. Overall, it’s great. There are some that work like a dream such as the Road Departure Mitigation which actively applies steering and braking power to keep the Pilot in the right lane, but there are some like the Collision Mitigation Braking System which gives off too many false alarms (this can be shut off though).

Brain over beauty is something that perfectly describes the Honda Pilot. Unlike the Ford Explorer which can rely on outward bling to sell (and sell it does), this one has to dig deeper. Once you get passed the soccer mom styling, the Pilot ends up as the more convincing choice. The sticker shock notwithstanding, there’s a lot more going for the Honda. It’s a thoroughly modern crossover that boasts of a handsomely appointed and roomy interior, better build quality, and top notch refinement. Sure, it’s not going to win any beauty contest, but at the end of the day, aren’t those traits mentioned something you should very well prioritize, especially in this class of SUV?