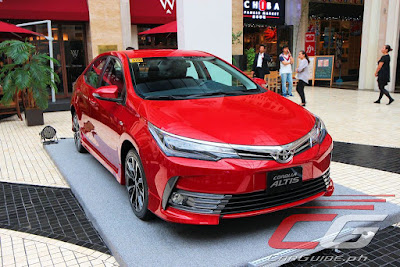 Just in time for its 50th birthday, Toyota Motor Philippines is giving its best-selling Corolla Altis compact sedan an A-List makeover for the 2017 model year. Already boasting qualities like reliability and durability, the new Corolla Altis can now add sporty style and top-notch safety to its list of strong qualities.

The changes first start with the aesthetics. Refining Toyota’s trademark “Keen Look” and “Under Prority” design, the 2017 Corolla Altis’s new face is visually bolder, stronger, and wider. Credit goes to the new headlights (incorporating Daytime Running Lights or DRLs across the line-up), bumper, and grille. Apart from the strong and wider look, it also smoothens out the Corolla Altis’s appearance. More changes are found in the wheels with new designs (same sizes) and new rear combination lamps.

Inside, the asymmetrical dash of the Corolla Altis has been re-worked and features materials that uplift the cabin feel both visually and tactilely. A new soft-touch leather insert now runs across the entire length of the dashboard capped off at each end with rounded air conditioning vents. Meanwhile, the center console has been reworked, incorporating the new infotainment system and climate control.

While there are no changes under the hood, the 2017 Corolla Altis is bound to be the safest car in its class. Already lauded at the ASEAN NCAP Grand Prix 2016 as a “Rising Star” for safety, the new Corolla Altis boasts of 7 airbags (driver, passenger, side, curtain, and driver’s knee), anti-lock brakes (ABS), and Vehicle Stability Control (VSC) as standard equipment.

There are five variants of the 2017 Corolla Altis with the following SRPs:
The new Corolla Altis will be available at all 51 Toyota dealerships nationwide starting on Wednesday, December 14, 2016. 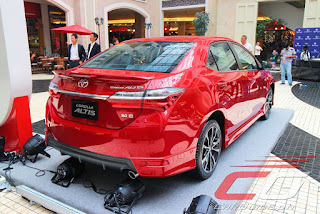