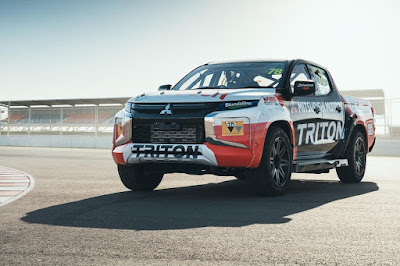 Last year, we reported that Australians are racing pickup trucks in the crazy “SuperUtes” series. With almost every major manufacturer taking part, it was only a matter of time that Mitsubishi would update its entry with the refreshed Strada. Well, here it is in action (see video below).

Racing under the Triton nameplate, this racing truck will see action over 8 weekends in a total of 24 races.

Based on a standard Mitsubishi Strada, the SuperUte versions are powered by a tuned version of the stock 2.4-litre turbo-diesel engine, which retains its aluminum engine block and pistons but gains modifications such as uprated camshafts, a modified oil sump, larger injectors, and larger fuel rails. The engine also receives a larger GTurbo high-flow turbocharger, a larger intercooler, an upgraded radiator for additional cooling and a Motec engine management system. A bespoke Torqit three-inch exhaust system is fitted from the turbo backwards, while the manifold is retained from the standard Strada. 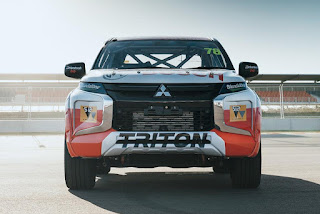 The front suspension is upgraded with SupaShock springs and absorbers whilst the rear end is completely modified: The standard rear differential and rear leaf spring suspension are removed and replaced with a SuperUtes control package, complete with a competition-spec differential and a fully adjustable horizontal SupaShock racing damper set up.

The rear suspension isn’t the only control component: The standard gearbox is replaced with a Tremac 6060 6-speed ‘H-Gate’ manual shift gearbox with set ratios along with a specially fabricated heavy-duty lightweight clutch and flywheel from Australian Clutch. All vehicles also run 20-inch PDW special ‘SuperUtes’ Series alloy wheels and Yokohama R-spec 20-inch tires. Other controlled elements include a Tilton pedal box and a Brembo brake system. All vehicles are fitted with a bespoke CAMS-approved (Confederation of Australian Motorsport Ltd) roll cage along with FIA-mandated safety harness, window net and other driver protection. The vehicle weight is also controlled and set at 1,800 kilograms to ensure parity across the manufacturers entered for the series.

The first race of the season took place over the first weekend of March at the Adelaide Street Circuit in South Australia where Mitsubishi Motors Team finished in a competitive third place in all three races of the weekend.