Suzuki Jimny is 2019 World Urban Car of the Year 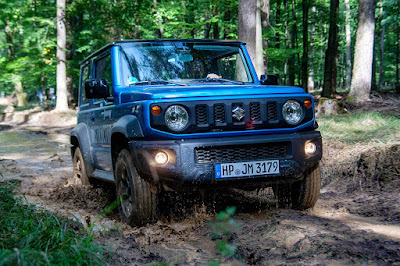 Mike Rutherford, World Car Awards Program Juror, Executive Director and Co-Chairman comments:
“Suzuki had again seen off many rival manufacturers from all corners of the globe to become a 2019 World Car finalist and now it’s an outright WCOTY category winner with its all-new Jimny. This is a company that produces some of the finest small cars on the market, and can really celebrate its global Urban Car success in winning a trophy at the New York International Auto Show”.

The Suzuki Jimny beat out the Hyundai AH2/Santro, Kia Soul, Audi A1, and SEAT Arona to win this award.

The Jimny’s win follows two Top 3 Shortlists for Suzuki with the Ignis in 2017 and the Swift in 2018. And in addition to winning the Urban Car of the Year, the Jimny was also a Top 3 Finalist for World Car Design of the Year.

The 2019 Suzuki Jimny was officially launched in March of this year after a preview at the Philippine International Motor Show last October 2018.
at 10:51 AM