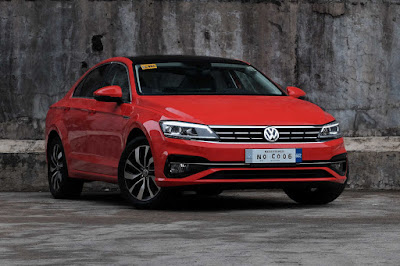 Some say, Volkswagen isn’t trying hard enough with its Matryoshka doll styling. From Santana to Lamando, they’re basically the same shape, enlarged or reduced depending on the requirement of the segment it finds itself in. That said, there’s also something oddly pleasing at seeing what’s essentially the same looking car in small, medium, and large sizes.

For instance, think how it’ll look in a hospital parking lot. It would be soothing to the eye to see a parking lot full of cars rocking some Bauhaus style. There’s the Santana for med reps, Lavida for their supervisors, and Lamando for the doctors themselves. Each of them has their own unique traits, yet because they’re all angular, chiseled, and understated—they’d easily blend in with the very posts that hold up the multi-level parking building. Imagine a world like that: efficient, orderly—where everything works like clockwork; it’s the sort of world the Lamando relishes.

The Lamando, even for Volkswagen, is all too predictable. The styling is neat and all, but doesn’t do much to really stand out. Apart from the single bold hue called Misano Red, the styling makes it, at a glance, too close to the cheaper Lavida or more expensive Passat; only in reality, it’s neither. It’s better looking than the former, but still not as well-proportioned as the latter. The easiest way to sum it up would be as the Passat’s more awkward, slightly uglier twin sister.

Perhaps even more interesting is how Volkswagen Philippines is positioning the Lamando. Typically, car buyers are used to three clearly segmented passenger car segments—sub-compact, compact, and executive sedan. Toyota does that with the Vios, Corolla Altis, and Camry or Mazda with the 2, 3, and 6. With Volkswagen though, there’s the Santana as their sub-compact, the Lavida as their entry-level compact, and the Lamando as their high-trim compact (the Passat maintains its position as the executive sedan). It shows in size alone: the Lamando is actually shorter than the Lavida, but with a slightly wider body and longer wheelbase (it’s still shorter than a Passat, though). Then, you have the price: starting at P 1.569 million, it’s priced along the lines of the Civic RS than it is the Accord.

Putting that in mind, then it should occur immediately that the Lamando does not offer the same levels of pampering expected of an executive sedan, rather it’s closer to a fully-equipped, top-of-the-line compact. The doors still have the unmistakably Teutonic feel to them, but sadly, so does the rather somber interior. The layout is well-executed and the controls, crisp; only to be let down by the hard-to-the-touch dash plastics. It’s got some semblance of luxury in the form of plush leather seats and even a sunroof; only half the time, you’ll be battling with the mesh-like lid just to keep it shut. Without a doubt, the biggest draw here is the large LCD instrument cluster, which Volkswagen calls Active Info Display and the snappy, clear-as-crystal 9.2-inch touchscreen.

As a driver, you can spend at least 10 minutes going through the different menus and functions of the Lamando’s infotainment system, so it’s just right that you get settled into the driver’s seat quickly. The seat itself offers power adjustment resulting in a comfy, supportive experience. The three-spoke steering wheel is just as good too, with just the right amount of thickness that promotes grip even when doing a three-point turn. The pedals are nicely positioned and well-spaced, too. Visibility is clear and unrestricted at all fronts thanks to the expansive glass and thin pillars.

Underpinned by Volkswagen’s MQB architecture, the Lamando has all the ingredients for a truly solid, entertaining drive; after all it’s the very same one that underpins the likes of the Golf GTI or even Audi TT. And true enough, it’s competent—comfy, but never floaty; agile, but never unpredictable. However, while there are spots of brilliance, it doesn’t fully show. What hurts it the most is that while it’s an impeccable dance partner, it does so coldly without any intimacy. And this is a shame because it’s truly quiet like a church and solid like a bank vault.

Partly contributing to the Lamando’s analgesic driving experience is the powertrain. The paper output seems great: 150 horsepower and 250 Nm of torque, but because this engine relies heavily on boost (it’s just a 1.4-liter after all), the accelerative properties is an off and on switch. Anything below 2,000 rpm is slow; anything above 4,000 rpm is a rocket. The unpredictable nature of the engine is exacerbated by the jerky 7-speed dual clutch automatic and the very aggressive idle start/stop system. It’s so adamant at saving fuel that, at times, it will shut down the engine as you’re coasting to a stop. This is alright if traffic were predictable like at a stoplight, but imagine this during EDSA rush hour—it’s a pain. What’s even sadder? Even with sensible driving, it does just 7.75 km/L (average speed of 13 km/h) making it comparable, but not better than bigger-engined compacts out there.

As tested, this Lamando SEL (Volkswagen has ditched the Comfortline and Highline tags for the SE and SEL) is priced at P 1.703 million which seems like a high price tag for a compact sedan, but go through the list of standard features, and it’s pretty extensive. Truly, the only thing it lacks is some sort of power adjustment for the front passenger. As it stands, he or she will have to be content twisting a hard-to-reach knob to bring the seatback up or down.

As a sedan, the Lamando is exemplary: it starts up with a single click (or in this case, push of a button), takes you to work, and takes you back home. It’s solid, comfortable, and when pushed, can be energetic. If buyers were simple cogs in a corporate machine, where they do as they’re told without question or second-thought, it’s filled with all the attributes expected of a high-trim compact sedan and that’s great. Yet, its greatest failing is that it does the “fitting in” role too well. Life isn’t about being the four-stud Lego brick going into a four-stud Lego hole—it’s about being different and standing out. While it occasionally shows brilliance, it still doesn’t truly come out of its comfort zone.