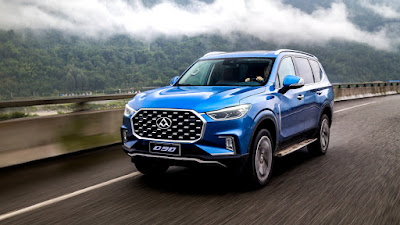 Despite being beaten to the punch by Maxus in plans to introduce a pickup truck locally, MG’s not backing down. Apart from confirming that its MG Extender (a pickup based off the Maxus T70, which in turn, is based off the T60) is still a go, reports say they’re also introducing their very own 7-seater body-on-frame SUV some time this year.

This development makes a whole lot of sense for MG for two reasons: first, if they’re introducing a pickup truck already, why not go the whole nine yards and bring in the SUV based on the very same platform; second, everyone knows that mid-sized 7-seater SUVs are hot-sellers here—just ask Toyota, Mitsubishi, Nissan, and Ford. Oh, and if these weren’t incentives enough, wouldn’t you want to beat Maxus in bring this SUV in?

See, the relationship between MG and Maxus with parent company SAIC is kinda weird. Both are sub-brands—the same way Volkswagen owns both Skoda and Seat. That being said, at least VW’s more subtle, opting to dress up the shared powertrain and platform with each brand’s respective corporate clothing. For SAIC, they simply slap on a different grille and call it a day. That’s why products like the Maxus V80 wear an MG badge in countries like Thailand.

The SUV that MG’s reportedly going to bring in is the D90—which is basically the Maxus D90 with a different grille; it’s an odd decision because SAIC does have a Roewe version of the D90 called the RX8 readily available (yes, the local MG RX5 is indeed, a Roewe). Still, fanning the flame is the existence of camouflaged D90 test mules wearing a different grille from the Chinese market version. These are understood to look like MG’s trademark stardust grille—the same one found in the MG ZS and MG 6.

Anyhow, if The Covenant Car Company, Inc. (TCCCI) did manage to secure the rights to distribute the Maxus D90, they’ll essentially be getting the flagship SUV made by SAIC for its MG/Maxus/Roewe brand. Dimensionally, it’s closer to North American-style SUVs than they are to traditional pickup-based ones, especially with its 5-meter length and 2.950-meter wheelbase. However, its T60-based platform means a commendable 550-mm water wading depth and a generous 210-mm ground clearance.

The kicker though is the powertrain. Currently, in all markets where the Maxus D90 are sold, it uses a 2.0-liter turbocharged gasoline engine making 220 horsepower and 350 Nm of torque. This engine is mated to a torque converter 6-speed automatic driving either the rear- or all four wheels (the 4WD has its own version of Terrain Selection). If MG really wants to make a dent in the market, they might have to consider plopping in the 2.0-liter diesel engine found in the Extender pickup. If that’s the case, they might as well take a page from Ford’s book and offer the 2WD variant with the single-turbo 161-horsepower engine, and the 4WD variant with the twin-turbo 214 horsepower one.

Do you think TCCCI is making the right move in bringing the Maxus D90 here as a MG?
at 10:25 AM