Gazoo Racing Tweaked Toyota Hilux is Still No Ranger Raptor, But It's Interesting 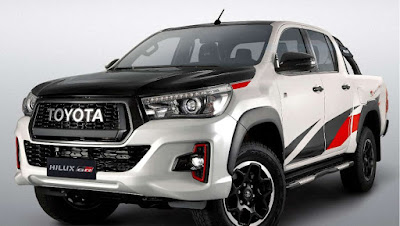 It was only going to be a matter of time when Toyota’s sporty Gazoo Racing or GR badge would make its way to its off-road vehicles like the Hilux. Well, the time is now: meet the Hilux GR Sport.

Not to be mistaken for Toyota Gazoo Racing’s top-end GRMN or “Gazoo Racing Made for the Nurburgring” models, GR Sport models simply adds some go-faster cosmetic parts and suspension tweaks.

The first Gazoo Racing model developed in Latin America, the Hilux GR Sport focuses on improved off-road performance—specifically high-speed on low-grip surfaces. If that thinking sounds familiar, it should: it’s the very same philosophy behind the Ford Ranger Raptor.

Unlike Ford Performance’s work though, Toyota stuck to the Hilux’s basic suspension. It’s been beefed up though with hardened front springs and double-tube dampers. The steering’s also been tweaked to offer a “more linear and progressive” response.

Sadly, Toyota opted to keep the stock 1GD series engine making 177 horsepower and 447 Nm of torque. This is mated solely to a 6-speed automatic with 4-wheel drive.

Outside, the Hilux GR Sport takes over where the Hilux Conquest left off. It has a racy exterior with tons of “Gazoo Racing” branding, new tubular side step boards, and high-gloss mirrors and door handles. For its wheels and tires, Toyota opted for 265/65 R 17 tires for “low weight and robustness.”

Inside, the Hilux GR Sport has even more Gazoo Racing branding in the push-start button, carpets, and even headrests. The gauge illumination has been changed also to white for a “more emotional driving feel.”

Limited only for the Latin American market for now, each Hilux GR Sport will carry a special serial number signifying its exclusivity. However, it won’t be surprising if pickup truck hungry Thailand will also opt to carry the Hilux GR Sport in the near future. And if that’s made available there, it’ll only be a matter of time when it reaches the Philippines as well.
at 11:37 AM