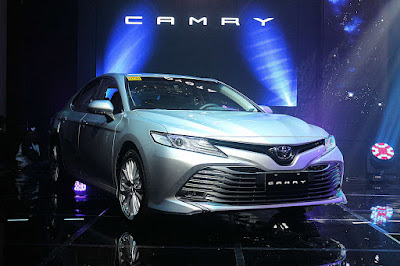 The all-new 2019 Toyota Camry has been officially launched (see full specs and details here). The country’s first taste of the new Toyota New Global Architecture or TNGA, it promises to excite the large (or in our terms, executive) sedan market. That being said, it competes in a segment that’s facing irrelevance thanks to the shift towards mid-sized SUVs and crossovers. We managed to sit down with Toyota Motor Philippines’s marketing and product people to find out how they plan to turn the tide with the 8th-generation Camry.

Based on industry data from 2015-2018, Filipino buyers are starting to prefer SUVs and other light commercial vehicles. Thirty two percent of the buyers bought a passenger car (average of 10,300 units per month). This year’s figures are much lower than both 2016 and 2017 where passenger cars sold an average 12,050 units and 12,700 units per month equating to a 36 percent and 32 percent market share respectively.

Despite the challenges facing the passenger car segment, Toyota Motor Philippines believes in being able to have the biggest product portfolio to serve the widest range of consumer needs. As a testament to that, the Japanese automaker has remained the king of the executive sedan segment with a 45 percent market share. It has steadily increased in the past 3 years (32 percent in 2016 and 35 percent in 2017) at the expense of the Accord, whose market share shrunk from 23 percent to 16 percent. Surprisingly, the Mazda6 is the one going up, rising from 9 percent to 13 percent currently.

Selling only 130 units this year compared to 260 units last year, Toyota Motor Philippines admits that the executive sedan market is highly cyclical and this is because the typical buyer appreciates good style, which is the primary reason of purchase. More than that, the Camry buyer is almost evenly split between genders (57 percent male, 43 percent female), aged 40-44 years old, and mostly married (93 percent). They also have an average monthly income of P 240,000 to P 260,000 which explains why Toyota hasn’t resorted to too much low-down and discounting schemes to move the Camry.

#4. They are chauffeur driven.

At this point, you’re wondering why Toyota didn’t opt to put technologies such as Toyota Safety Sense, idle start/stop, and all that. Well, that’s because based on their research of 100 Camry owners, they are mostly chauffeur driven; thus, they deemed it appropriate to put more luxury and convenience niceties in the back. That’s why the 2019 Camry has features like butterfly rear headrests (a feature that debuted in the Alphard luxury MPV) and a capacitive touch screen panel at the back that controls both climate and audio functions from the backseat while keeping a largely carried over powertrain, in this case a 2.5-liter 4-cylinder engine mated to a 6-speed automatic.

#5. Honda’s doing it wrong with the Accord.

Short of chastising their main competitor for coming up with a half-baked executive sedan. The Accord finds itself wrestling for market share exactly where the Camry is. Compared to Toyota buyers though, the typical Accord buyer skews heavily towards male (72 percent) and has a significantly lower income (P 180,000 to P 200,000 monthly average). As one Toyota executive said: “Toyota sells cars, Honda sells technology.” On the flipside, this is what Mazda’s doing right with the Mazda6. Having the same income bracket as the typical Camry buyer, Mazda went straight for the self-driven individual. Their buyers though heavily skew male (80 percent) but are younger (35-39 years old). Only 67 percent of Mazda6 owners are married.

#6. Camry wants some of the Mazda6’s market.

With the full model redesign though, Toyota Motor Philippines wants a bit of that Mazda6 market for themselves. Thanks to the all-new platform, the Camry is now lighter and has a lower center of gravity which should make for a more exciting drive. Furthermore, the TNGA platform has also allowed for bigger interior space and better NVH, suiting the Camry’s current crop of buyers.

Quizzed on the availability of just one engine choice for the all-new Camry, Toyota executives did admit that they’re studying to bring in the Camry Hybrid for the Philippine market. Having said that, buyer education is very important when it comes to the sustainability of bringing in a hybrid model. Toyota Motor Philippines mentioned that the Prius sold well for the first 2 years, only to have sales all but dry up afterward.

In addition, they said that the 50 percent reduction in excise tax due to the TRAIN law isn’t enough to keep the potential retail price competitive. In Thailand, for example, where hybrids do enjoy additional government perks, the Hybrid model is 11 percent more expensive the conventional gasoline model. Using that as a basis, the Camry Hybrid could cost P 2,300,000 compared to the 2.5 V at P 2,007,000 and this isn’t even considering the sort of added features that come bundled with the hybrid drivetrain such as Toyota Safety Sense 2.0 which will push the price even higher.
at 8:13 AM