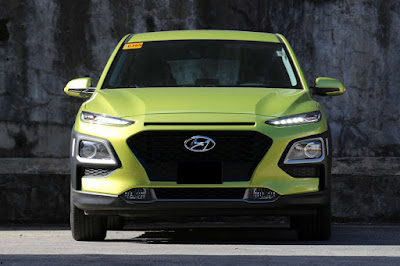 Hyundai Asia Resources, Inc. (HARI), the official distributor of Hyundai vehicles in the Philippines, continues its strong show by registering a 3.5 percent year-on-year increase for the month of November 2018; the second consecutive month of year-on-year growth. Unit sales rose to 3,426 units from the recorded 3,309 units sold in November 2017. This puts the year-to-date total at 32,444 units sold from January to November 2018—a 4.6 percent decrease from the same period of the previous year.

Passenger Cars (PC) maintain its position as the brand’s volume driver by accounting for 56.7 percent of the total unit sales. The segment declined by 20.6 percent to 18,389 units for the period of January to November 2018 compared to the 23,167 units sold in the same period of 2017. The period though includes the phase out of the Accent and with its recent introduction of an all-new 2019 model, Hyundai expects its PC sales to pick up quickly.

Light Commercial Vehicles (LCV), on the other hand, rose to be the front runner of the brand’s growth. The Kona has been very strong for HARI, moving 528 units in November enabling it to become the best-selling sub-compact crossover, outselling the Ford EcoSport last month. Given that it’s been in the market for only 4 months, the Kona has already managed to move 2,552 units or 53 percent of the EcoSport’s full-year total.

Furthermore, the H-100 light-duty truck has seen an uptick in sales due to the rise in construction activity from the administration’s “Build, Build, Build” program, easily offsetting any negative effects that were experienced in the automotive industry for the year. This has led to the segment selling a total of 14,055 units from January to November 2018, a 29.4 percent increase from the 10,858 units sold in 2017.

“As economic headwinds begin to slowdown, Hyundai is in its best position to take advantage of what is left of 2018. Backed by a strong Hyundai community in the country, we have proven time and again that our products and services remain relevant in the country’s automotive industry,” said Ms. Ma. Fe Perez-Agudo, HARI President and CEO. 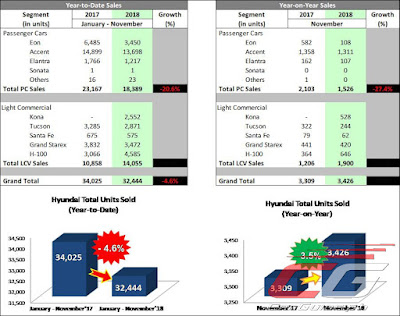