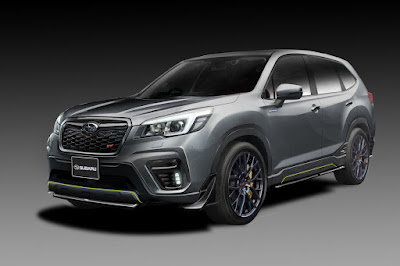 As the Tokyo Auto Salon 2019 nears, Japanese automakers are ramping up the tease leading to the annual aftermarket auto show. Subaru, through their motorsports arm, Subaru Technica International or STI is no different, showing off two new concepts—the Impreza STI Concept and the Forester STI Concept.

Now, before everyone gets excited about the prospects of seeing a turbocharged Forester or Impreza, this isn’t the first time Subaru used the term “STI Concept” to denote what’s essentially a kitted-up road car. As such, expect both the Forester STI Concept and Impreza STI Concept to simply act as a means for Subaru to show off upcoming body kits and aftermarket accessories.

Still, at least there’s no denying that they do look cool.

The Impreza STI Concept is based off the newly-refreshed 2.0i-S EyeSight hatchback. It’s fitted with a variety of look-faster parts like a wrap-around aero kit, high-gloss black rims, and a central exit for the exhaust. In addition, Subaru says it’ll also be fitted with other STI goodies so that’ll likely be in the form of STI interior bits as well as a strut tower brace, springs, and perhaps even shocks.

Even more interesting is the Forester STI Concept. Based off the Advance (aka Hybrid model), this sporty crossover comes with an exclusive new color dubbed “Fighter Gray.” It’s decked out with a full aero kit (with neon green highlights to boot), and the North American market’s 19-inch WRX STI rims. Completing the transformation are 6-pot Brembo front disc brakes (also from the WRX STI) to offer a “hint of performance.”

Other Subaru vehicles on display at the Tokyo Auto Salon 2019 include both the Levorg and WRX STI wearing new STI parts.
at 12:48 PM