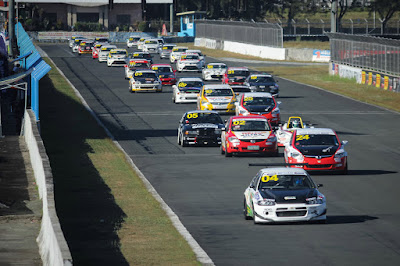 Now on its 9th edition, the Petron 8 Oras ng Pilipinas continues to be the premier endurance race in the country. This year hosted the biggest event by far with a record-breaking 32 teams and 122 drivers taking on the challenge last December 2. It also proved to be the toughest with all competitors pushing a lot harder to win as compared to previous years. As a testament to this, only 24 cars survived the grueling enduro to see the chequered flag at the Clark International Speedway.

The #4 SmartFuel2sRace Honda Civic EG qualified on pole with a 2:10.930 time set by Trent Grubel, besting the rest of the field by more than a full second. But that only earned them bragging rights as there was still 8 hours of racing to go.

The field of RP, FM-1, FM-2, FM-3, and Open Class cars got the green light at exactly 8:30 AM on Sunday. A battle immediately brewed between the #2 Team Helix Ultra Honda Civic FD, #24 H Racing Honda, pole-sitting #4 SmartFuels2Race Civic, and last year’s winner the #1 Tuason Racing Formula V1 that eventually took the lead in the opening hour.

While the big guns slugged it out in front, there were also other notable competitors on the grid. A total of 6 female drivers took part in the Philippine Endurance Challenge (PEC) this 2018. Emily Duggan from Australia and celebrity racer Gaby Dela Merced were back again behind the wheel. Then there was the all-female entry of Team Helix Ultra 3 with Aira Medrano, Dimple Napat, Gabie Desales, and Kathy Villar.

Another note-worthy entry was from the Motorsport Development Program (MSDP) where future champions drove a Mazda Philippines-backed Mazda 2 Skyactiv all the way to the finish line.

As an endurance race, positions are not only gained or lost on track. Pit stops play a crucial role where teams need to refuel and do driver changes. The most contrasting strategies are of the #34 Hyundai Accent CRDi of Team AutoForce that only required to 2 fuel stops while the Formula V1, with its small fuel tank had to stop 10 times.

With a consistent, quick pace and reliability, the #2 Team Helix Ultra 1 Honda Civic FD ran all day without a hitch and was truly in a class of its own. Andre Tan, Estefano Rivera, and Paolo Santos, winners of the 4 Oras ng Pilipinas last June, finally conquered the full 8-hour race to take the chequered flag 1st overall and in RP Class.

Despite having to rebuild their engine overnight, the #5 AutoPerformance-Victor Hardware BMW M3 of Francis Aguila, George Apacible, SJ Park, and Stefan Ramirez gave chase all the way to the end to finish 2nd only 20.079 secs behind.

Raceform x Ethanworx x Garage 2233 won the Team Championship with a total of 510 laps between by their 3 entries. They were followed by Team Cebu x MR Auto Shop with 379 laps completed, and SmartFuels2Race Team with 375.