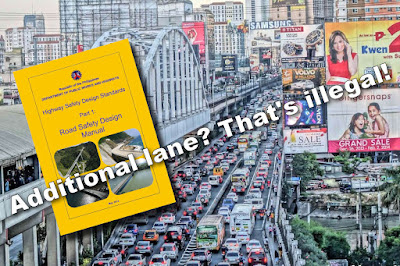 Right after Christmas and the eating binge known as Noche Buena, the MMDA seems to be feeling its belt tighten a bit and has proposed a “road diet” to ease EDSA traffic.

A report published by ABS-CBN News says that MMDA General Manager Jojo Garcia is contemplating on reducing the width of EDSA from its current 3.4 meters to 2.8 meters citing a Japanese study. He says that this “road diet” scheme will enable EDSA to spawn an additional lane but will be assigned primarily to motorcycles and vehicles making a U-turn.

Here’s the thing: it goes against the Department of Public Works and Highways (DPWH)’s own road safety standards.

Using the DPWH Road Safety Design Manual (a very informative guide for all government agencies, mind you), the minimal width for a lane is set at 3.35 meters. As the traffic volume increases, the extra width can be justified at up to 3.65 meters; in other words, the width actually increases.

Now, if the MMDA’s reason to add an additional lane on EDSA would be to make merging or U-turns easier, oh, there’s a standard for that too. A taper is required at the start of an “auxiliary lane”, the length of which is determined by the road’s designed speed limit. In the case of EDSA, it should be a 30-meter taper.

Having said that, the MMDA’s proposal to reduce the width of EDSA’s lane to 2.8 meters could have a positive effect on safety. Studies done says that urban roads less than 2.8 meters in width, but wider than 3.1 meters increases the risk for crashes.

Regardless, for as long as the DPWH standards exist, that must be followed. Sorry, MMDA, you better try again.