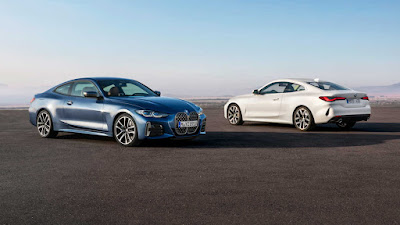 Well, it looks like BMW is sticking to their design guns after all. After some scathing remarks on the Concept 4’s grille, the German automaker has gone ahead and put it into production as the 2021 BMW 4 Series.

Now, it seems BMW knows that the nose is a major sticking point in the new design that they’ve dedicated an entire paragraph about it. They say it’s a nod to their legendary models, but after starting at it for hours, we just can’t see it. Still, kudos to BMW designers by making the M Sport version look less fugly. The rest of the car, especially the backend comes across as generic.

So, while the exterior is polarizing at best, at the least the all-new 4 Series comes up with a clean and surprisingly boring interior. Aside from the high-set center console, it can pretty much pass off as the 3 Series sedan—which could be both a good and bad thing. But oh, BMW wants to point out that there are new changes here like the migration of the start/stop button from near the steering wheel area to the center console, and how the instrument cluster and Control Display center screen have been grouped together.

Standard features include three-zone climate control, rear seats that tumble in a 40/20/40 split, and an infotainment system that can be upgraded over the air (OTA). Oh, and at least both Apple CarPlay and Android Auto are now standard.

All engines in the 4 Series are now mated to an 8-speed automatic with the M models getting the added convenience of paddle shifters, and a new “Sprint” function which is there to help you get away faster from your friends who’d question your taste in aesthetics.

BMW says that the 4 Series has been further optimized from the 3 Series with a lower center of gravity, and improved aero properties. The standard suspension already comes equipped with lift-related dampers, but the M ones get adaptive suspension with electronically-controlled dampers.

The 2021 BMW 4 Series goes on sale in Germany by October 2020 for the top-variant M440i. The rest of the line-up though will be gradually phased in, with the diesels last to join the family by March 2021.