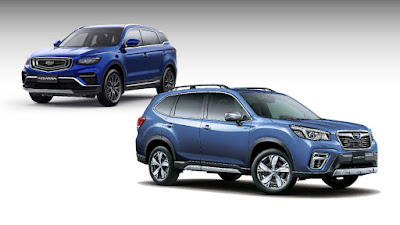 Subaru made the news when they announced that they’re bringing in the Forester e-Boxer into the Philippines. This move was supposed to make them the first mainstream brand to offer a hybrid-powered compact SUV. Set for a third quarter 2020 launch date, the Forester found itself sabotaged by an unexpected carmaker: Geely.

In a surprising move, Geely beat Subaru to the punch when they launched their own hybrid compact SUV, the Azkarra, a full quarter earlier. This created a strong market buzz not just for Geely Philippines’s marketing savvy, but because they finally combined one of the most popular car body styles in the country—the compact SUV with an efficient gasoline-electric hybrid engine.

With two carmakers now trying to occupy the same space, comparisons are inevitable. And now that the general specs of the Forester e-Boxer have been made available, here’s a clearer picture if the Geely Azkarra 48V EMS were to be pitted against the Subaru Forester e-Boxer.

While not much separates these two compact SUVs dimensionally, under the hood they take completely different directions. On one hand, there’s the Azkarra which pairs a smaller (1.5-liter) turbocharged motor and a 13-horsepower electric motor. On the other, there’s the Forester which uses a larger (2.0-liter) normally aspirated engine with a larger electric motor (17 horsepower) and battery (13.5 kW).

It is worth noting that the Geely’s hybrid system is of the mild variety (MHEV) which means the Azkarra can’t run solely on electric power alone. The hybrid system is there to take electrical load off the internal combustion engine which should boost overall fuel efficiency, but only slightly. On the other hand, the Forester can, according to Subaru, run on pure electric mode for up to 50 kilometers.

Still, the Azkarra has the advantage with a quicker 0-100 km/h time, higher top speed, and slightly better mixed city/highway fuel efficiency. It is worth noting though that the Forester e-Boxer’s figures are computed through NEDC fuel economy parameters, while the Geely Azkarra’s are manufacturer-provided figures.

You can check out the rest of the spec comparisons below, but if you want to read more about these two vehicles you can also check these links: 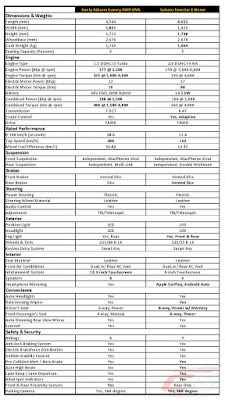