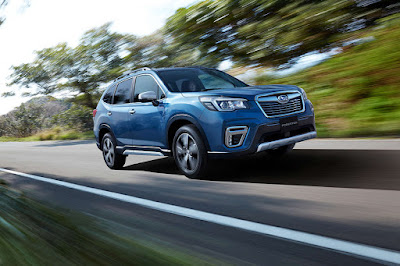 In a a day or so, Subaru will be unveiling its first-ever hybrid vehicle for the ASEAN region: the Forester powered by the new e-BOXER engine. Arriving 6 months since the conventional model debuted in Taiwan (and a few weeks ahead of its official Philippine launch), the Forester e-BOXER has the potential to re-write history as the Japanese carmaker aims to deliver cars made under the philosophy of “Enjoyment and Peace of Mind.”

Before Subaru’s regional distributor, Motor Image, lifts the cover at the Singapore Motor Show and outlines its plans to roll out e-BOXER throughout the 9 markets it operates in, it’s time to take a closer look at this cutting-edge gasoline-electric hybrid technology.

#1. Designed to be Electrifying

Underpinned by the Subaru Global Platform, the 2019 Forester is designed with electrification technologies right from the get-go.

That said, some work had to be done on the Forester’s rear suspension in order to accommodate the electric motor and lithium-ion battery pack. It’s portlier than the 2.0i-S (curb weight is up to 1,664 kilograms) and because of this, engineers opted to add a support to the rear subframe.

This move has not only improved the body’s stiffness, but has also reduced noise and vibration as well. Subaru engineers even reckon that the Forester e-BOXER should offer equal or even better handling stability over the conventional Forester.

With the e-BOXER powertrain, Subaru says they’ve found the best balance between power and economy. Like other gasoline-electric hybrids, the Subaru e-BOXER offers near instantaneous torque thanks to its electric drive. And unlike a purely electric solution, it doesn’t suffer from range anxiety because the electric motor is still hooked up to a conventional engine that drives the wheels and even charges the battery as needed. No need for charger cables, charging stations, and what have you.

However, the Subaru e-BOXER does offer three advantages over other gasoline-electric hybrids.

First up, thanks to the packaging of the Subaru Global Platform and the boxer engine’s inherent layout, engineers were able to place the electric motor and the battery along the car’s central axis keeping the handling characteristics of the Forester e-BOXER close to its conventional-powered sibling. Second, the compact-sized electric motor and battery means minimal effect to luggage compartment space (500 liters are still available with the rear seats up)—a primary reason for buying an SUV. Sure, Subaru had to sacrifice the spare tire, but in its place, is a tire inflator kit. Third and finally, e-BOXER’s full potential can be unlocked by the Subaru Intelligent Drive or SI-DRIVE system. For its services in the e-BOXER, a third mode, ECO-C has been added to maximize functions such as brake energy regeneration.

Despite sharing the same engine designation as the conventional Forester (FB20), the revised power and torque figures should give an indication that this powerplant is different. In fact, for the engine to work in unison with the electrified set-up, engineers had to revise a lot of things: intake, cylinders, oil switch, crankshaft, drivebelts, and EGR among others. Oh, and the fuel tank is now smaller at 48 liters.

These changes also have a welcome change that long-time Subarus will appreciate: it will need less engine oil. Compared to conventional models which require 4.2 liters (a very odd number mind you), this set-up needs just 4 liters. Hurray.

Subaru says that the e-BOXER should improve the Forester’s fuel mileage by up to 40 percent. Using the generous JC08 test cycle standard, it makes 18.6 km/L. But even when switching to the more stringent Worldwide-harmonized Light Test Cycle (WLTC) standard, it makes a combined city/highway figure of 14 km/L.

Like any other gasoline-electric hybrid, the Subaru e-BOXER engine allows this particular Forester to run on purely electric power at low speeds and under low throttle inputs for limited distances (up to 50 kilometers). At times, the two power sources can work together to give the drivetrain an extra boost while also charging the battery pack in the process. The batteries can also be recharged by capturing waste kinetic/braking energy.

Interestingly, while gasoline-electric hybrid set-ups harp on improving fuel efficiency, thanks to the Subaru SI-DRIVE, drivers can also change the e-BOXER’s set-up to deliver a more potent punch. The Japanese carmaker has yet to reveal any 0-100 km/h times, but they say that there’s a stronger urge whenever the gas pedal’s depressed at around 40 km/h. This is crucial because most overtaking isn’t done from a standstill, but when moving, typically at speeds in the 40 km/h range. Furthermore, Subaru has tweaked the regenerative brakes of the e-BOXER to make it feel natural; it should feel the same as the conventional Forester.

#5. A Special Kind of EyeSight

Subaru has touted its unique EyeSight system because thanks to a pair of stereoscopic cameras, it enables 6 driver-assistive features. In conjunction with the e-boxer drivetrain, it can also maximize fuel efficiency too. When adaptive cruise control is engaged, it adjusts the follow distance to the car ahead to maximize the brake energy regeneration and coasting, improving the range of the electric motor. This is most especially true when the SI-DRIVE is switched to ECO-C mode.

Naturally, all this talk of having a gasoline-electric drivetrain may cause some people to believe that the Forester e-BOXER is less capable to do the “rough stuff.” Don’t worry, because it’s still every inch an SUV. Ground clearance remains at a generous 220 millimeters while its water wading depth is rated at 500 millimeters.
at 4:00 AM