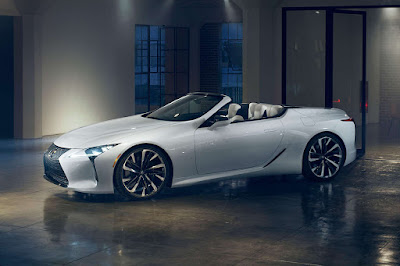 Lexus is using the world-stage to determine if it’s worthwhile to give the world another drop-top model. Since the end of the IS C in 2015, the Japanese luxury brand had gone without a halo convertible in its line-up. If public reaction is positive that may change with the LC Convertible concept.

Still a concept at this point, the Lexus LC Convertible is pretty much production ready. Like its coupe sibling, the LC Convertible concept is long, low, and lean.  Yet, designers say it’s an evolved beauty that can stand on its own.

In addition to the visual appeal of the exterior, the LC Convertible concept cocoons the drivers with its tailored seats to the high-quality fit and finish of its switches and buttons. For the concept, the LC Convertible features crisp white leather trim with yellow accent stitching.

Though Lexus hasn’t given any details about the LC Convertible concept’s powertrain, the company promises that true performance will back up its strong design. Its short overhangs, 22-inch wheels, and wide stance are some of the reminders of this car's performance potential.