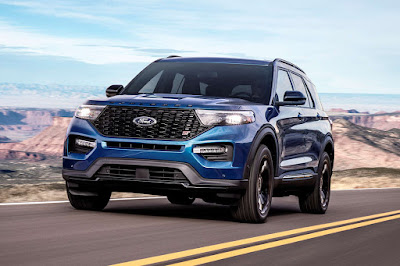 When Ford showed off the 2020 Explorer SUV a few days ago, there was one variant that’s noticeably missing: the Explorer Sport. Well, just in time for the North American International Auto Show (NAIAS), the American carmaker dropped a bombshell in the form of a 400-horsepower SUV: the Explorer ST. This, ladies and gentlemen, is the Explorer Sport’s replacement.

The Explorer itself is no push over. Built on an all-new platform, it’s about 90 kilograms lighter than its predecessor. Then, you add a bit of Ford Performance tweaking and you end up with a three-row crossover with sport-tuned suspension.

Plus, it’s got a brand-new engine too—a twin-turbo 3.0-liter V6 making 400 horsepower and 563 Nm of torque. Mated to a 10-speed automatic with all-wheel drive, it should enable the Explorer ST to reach 100 km/h in less than 7 seconds—faster than even the Range Rover Sport HSE.

Inside, it’ll have exclusive ST stuff such as a flat-bottomed steering wheel and front sport bucket seats. Naturally, as a family hauler, it’ll have stuff such as a fancy infotainment system complete with a 10.1-inch touchscreen system with SYNC 3. Outside, the Explorer ST is distinguishable with its “Explorer” hood badging and black accents on the grille, liftgate, lower body cladding, side mirror caps, and skid plates.