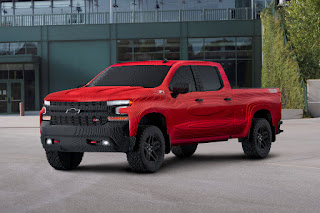 After coming up with the Lego Batmobile in 2017, Chevrolet and Lego team up once more and this time Lego Master Builders have immortalized the full-sized Silverado pickup truck in 334,544 pieces of Lego.

Chevrolet Silverado is among the best-selling full-size pickup trucks in North America, and is the “big brother” to the Colorado pickup that General Motors builds in Rayong, Thailand, and exports to markets throughout Southeast Asia, including The Philippines.

Built to commemorate the upcoming The Lego Movie 2: The Second Part, 18 specially-trained Lego Master Builders spent more than 2,000 man-hours building the Lego Silverado which was working lights and graphic details.

In The Lego Movie 2: The Second Part, heroes from The Lego Movie reunite to save their beloved city from the threat of Lego Duplo invaders from space. In this new movie, a custom mini-build of the Silverado High Country will make an appearance.

Email ThisBlogThis!Share to TwitterShare to FacebookShare to Pinterest
Filed Under: Chevrolet Corporate, News