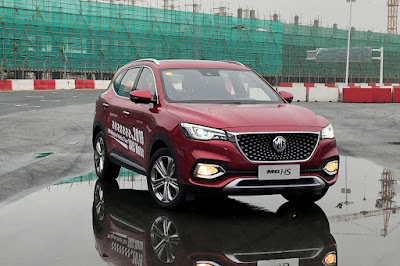 Meet the MG HS—the SUV that’ll forever change your perception of the words, “Made in China.” Designed and built by SAIC Motor’s passenger car division under its MG brand, the MG HS is similar in size to the likes of the Subaru Forester and Mazda CX-5. Yet, because of its technological advancements, it’s being pitched more as an alternative to something a class higher.

Initially, that sounds crazy, but after seeing the MG HS Trophy up close, there’s reason behind their thinking. For starters, there’s the way the MG HS looks. Yes, some people may point out that there are hints of Audi and Mazda to its design, but it’s nonetheless gorgeous. There’s not a line wrong here, down to the generous 18-inch wheels.

Aside from getting the exterior nailed down, MG’s gotten the interior down pat as well. The design, fit and finish, and number of high-tech features can surpass any other Japanese crossover on the market today.

Start poking around this highest-trimmed Trophy variant and all you’ll find is soft-touch plastic, supple leather, and crisp, well-damped switchgear. Together with its panoramic sunroof, it’s got a fully-digital 12.3-inch LCD instrument cluster, a 10.1-inch floating tablet-style infotainment screen, and even an 8-speaker Bose sound system.

Not just an eye-catching SUV, the MG HS can hit the century mark in just 7.5 seconds—similar to the Subaru Forester XT. Its powertrain is a 2.0-liter turbocharged 4-cylinder engine making 230 horsepower and 360 Nm of torque. This is mated to SAIC’s very own 6-speed dual-clutch automatic sending power to all four wheels.

Launched for the Chinese market in August of last year, the MG HS is the newest SUV from SAIC’s MG brand. Although MG’s newly-established Philippine distributor, The Covenant Car Company, Inc. or TCCCI hasn’t confirmed whether they’ll be bringing in the MG HS or not, if they plan to make in-roads into the market quickly, they should.