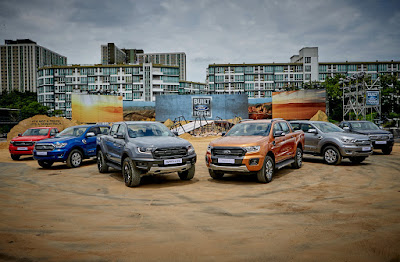 The Ford Ranger continued to be a bright spot for the American carmaker as the nameplate achieved all-time record sales in the Asia-Pacific region last year—its tenth consecutive year—with retail sales climbing 5 percent to 139,501 units.

The Ranger’s record-breaking year was driven by its best-ever full-year performance in Thailand, the Philippines, and New Zealand. It also maintained its multi-year run as the best-selling pickup truck in both New Zealand and Vietnam.

Nonetheless, Ford attributes the Ranger’s strong regional performance with the introduction of the unique high-performance Ranger Raptor which sold more than 5,030 examples since its launch in the region in the third quarter.

“The Ranger continues to set the benchmark for the pickup truck segment with its unmatched versatility and capabilities,” said Peter Fleet, president, Ford Asia Pacific.

“The launch of the new Ranger in 2018 allowed it to continue revolutionizing the segment, with Ranger Raptor pushing its success story to the next level and further transforming the ownership experience for truck enthusiasts across the region,” said Fleet.

A freshened lineup of the Ford Ranger in 2018 delivered an even more capable pickup with more class-leading technology, safety and convenience features, including an advanced Bi-Turbo diesel engine mated with 10-speed automatic transmission.

2018: Record Ranger Sales Across the Region