Innovation Puts MG and SAIC in the Driver's Seat 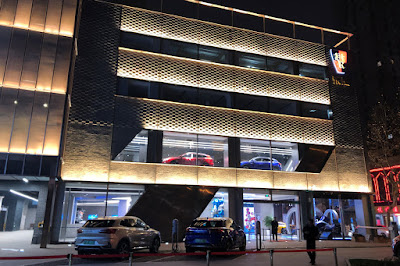 It’s like a scene from the future. Hopping down in front of the SAIC Intelligent Plaza in cosmopolitan Shanghai, the streetscape is eerily quiet. As the Shanghainese enjoy the perks of owning an electric vehicle, the rush hour traffic didn’t have the usual sounds or smells of gasoline or diesel engines. It’s hard to imagine, but this is China undergoing a major transformation.

Inside the sprawling SAIC Intelligent Plaza, a cutesy humanoid robot greets visitors and by using facial recognition, can track and follow their movements. To one side, there’s a virtual reality test drive machine that looks like a one-man roller coaster and to the other, an augmented reality device that allows people to poke around the various vehicles on display.

The set-up is, admittedly, gimmicky, but it sends a very clear signal that the Chinese aren’t the same copycat and unoriginal automotive players they once were. Fueled by increasingly sophisticated buyer tastes and tightening government regulations, carmakers such as SAIC have begun pumping huge amounts of money into R&D.

Once seen as merely a move just to bring prestige to the SAIC Group, MG (and its Chinese domestic market equivalent, Roewe) have successfully morphed to become the crown jewels. Sales of MG and Roewe have grown over 60 percent compared to the modest national rate of just 1 percent in 2018. Driving that growth is SAIC’s decision to make MG and Roewe their innovation leader.

In 2015, SAIC and the Alibaba Group set-up plans to produce China’s first “internet car.” A year later, that plan came to fruition. Aimed at addressing a driver’s needs from avoiding traffic to looking for parking, setting repair and maintenance reminders and so forth, SAIC and Alibaba combines the former’s automotive engineering know-how with the latter’s various online solutions like Alipay, Ali Telecom, and AutoNavi. In 2017, they’ve reached a milestone by rolling out more than 400,000 “internet cars” to customers in China and more recently, in Thailand as well.

Apart from connected cars, SAIC has made inroads in the development of New Energy Vehicles or NEVs as well. In fact, it’s the only Chinese brand that’s simultaneously developing plug-in hybrid, pure electric, and fuel cell-powered vehicles. Sales have already topped 60,000 units annually—up 140 percent compared to the year before—and that number is set to rise further with plans to launch 30 NEV products by next year.

Finally, SAIC is also getting into the autonomous driving game. Two years ago, it’s begun developing Vehicle-to-Everything (V2X)—a technology that lays down the foundation of smart cities and driverless cars together with China Mobile and Huawei. Since then, it’s gained the license for autonomous driving tests in California—the only Chinese automaker to do so. SAIC has also setup the first intelligent driving base in China where they’ve already accumulated more than 500,000 kilometers of testing.

For now, the success story of MG and Roewe remain mostly confined to the Chinese market (although in Thailand, they’re now the seventh best-selling car brand), but China’s drive to spend R&D will help companies like SAIC develop the manufacturing and branding expertise it needs to succeed elsewhere. It’s a direction of travel that could very well put China and brands like MG in the driver’s seat.