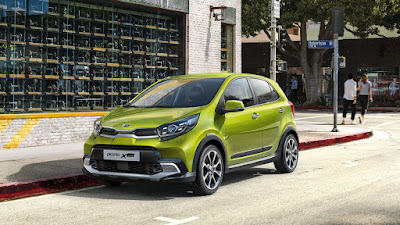 After getting refreshed in its home market of Korea (as the Morning), Kia is now showing off how its Picanto hatchback looks like for global markets, and interestingly enough, the 2021 model includes a variant with SUV-inspired styling.

Before talking about that one, the global Picanto model does get the pretty much the same exterior updates as its Korean market counterpart. The tiger-nose grille now has a textured surround, with chrome “wings” extending to the re-designed headlights. The headlights themselves offer four-bulb LED DRLs, echoing the new LED rear combination lamps. The bumpers have also been re-sculpted to give it a wider, more stable appearance.

Interestingly for Europe, the Picanto gets a variant called, “X-Line.” According to Kia, this echoes the appearance of small SUVs, which is all the rage these days. It gets protective skid plates with metal-effect trim and a gloss black surround that extends from the grille all the way to the wheel arches. Kia’s made no mention of any ride height changes, so it’s safe to assume it’s the same as the regular hatchback’s.

In Korea, the 2021 Picanto is offered in two 1.0-liter Smartstream G engines. The normally-aspirated one produces 67 horsepower, while the turbocharged one produces 100 horsepower. The kicker here is that European models won’t be getting a 4-speed automatic. Instead, they’ll be using Kia’s new Automated Manual Transmission or AMT. For the uninitiated, it’s basically a 5-speed manual with a computer-actuated clutch and gear shift actuators.

Picanto sales have already started in Kia’s home market of Korea, while European sales will commence by the third quarter of 2020. With that, it’s just going to be a matter of time when the Philippines will get the refreshed Picanto. With Suzuki bringing in their S-Presso, should Kia Philippines do something left-field and bring in the SUV-inspired X-Line?