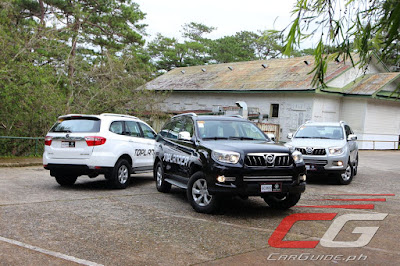 The pickup-based passenger vehicle (PPV) segment is currently the hottest contested segment in the country and everyone wants to get into the game. While the Foton Toplander has had its shining moments, the lack of an automatic gearbox limited its appeal. Two years since its Philippine launch, Foton has finally given its SUV a two-pedal layout and you know what? It’s worth the wait.

While the Toplander’s manual transmission was generally alright, the Getrag 5-speed ‘box didn’t escape a truckish feel due to its notchiness and oddly spaced gear ratios. Overnight though, all that’s changed with the introduction of this 6-speed automatic. Now, where could Foton have sourced the gearbox? Aisin? ZF? It turns out, it’s from Daimler, which makes a whole lot of sense given that the two companies do operate a joint-venture.

With that question out of the way, the next obvious one would be: how does it drive? Well, much like any German luxury SUVs that use a similar gearbox (Daimler is the parent company of Mercedes-Benz), it’s smooth, responsive, and well-mannered. The Toplander may be late to the automatic game, but categorically speaking, it’s now got the best gearbox in the business.

Like Mercedes-Benz vehicles with a similar gearbox set-up, the Toplander starts from second gear by default. This reduces the unwanted surge from having to use the tall first gear. Instead, the gearbox uses the generous torque curve from the engine to smoothly move this 2,020-kilogram SUV forward. From there, it goes through each gear smoothly, without any shock or hesitation. It goes about its business, keeping the revs low (it shifts typically at 1,500-2,000 rpm intervals) with 100 km/h achieved at a low 1,700-1,800 rpm in top gear. The gearbox also comes with multiple modes: Normal, Eco, Sport, and Winter. Slap the shifter to the right and it’s got a manual mode too. That said, fiddling with these buttons is largely unnecessary since the transmission logic is nailed down right.

Connected to the gearbox is the same 2.8-liter Cummins ISF engine. Producing the same levels of power (161 horsepower) and torque (360 Nm) as its manual counterpart, the Toplander automatic actually feels brisker. Whether it’s tackling the steep Kennon Road going up Baguio or cruising leisurely on the NLEX, the well-sorted gear ratios maximize the available power at all times. Pair that with the relaxed, torquey nature of the engine means the revs are kept down effectively reducing the diesel clatter. The engine and gearbox combination also improves the Toplander’s fuel efficiency too. It does 14.28 km/L on the highway, figures which are extremely close to the manual transmission’s 15.4 km/L set during Eco Run conditions.

Now, being a pick-up based SUV, the Toplander doesn’t lend any sporty pretensions to itself. Rather, it’s going for a more predictable and safe experience. Despite its size, it remains easy to maneuver through tight spaces. There’s good visibility which means being able to place it well through tight confines be it in urban traffic or narrow off-road trails. The steering is hefty, but precise enough when pushed hard. It also does understeer quite a lot, but feels planted enough through all but the tightest of bends. The ride is somewhat firm, but isn’t bouncy. It absorbs the worst of the potholes with just undulating road surfaces being its main weakness. Subjectively speaking, it’s actually better than say, the Toyota Fortuner. However, if there’s one thing that needs work, it’s the mushy brakes.

Outside, there’s no way to tell the Toplander manual apart from the automatic—not even via a token “A/T badge.” Still, go into the details and the Toplander automatic does get exterior cues which were once reserved for the range-topping 4x4 model: LED daytime running lights, side step boards, chrome window moldings, and roof rails. In addition, with two variants available for the automatic, the higher-spec EX variant is distinguished by its larger 17-inch alloy wheels and chrome side mirror caps.

Echoing its exterior, the Toplander’s interior is pleasantly modern, though conservatively designed. Much of the materials used are hard-to-the-touch, but at least the fit and finish is consistent, and the build quality solid. There are a few stragglers like the stalks and the vanity mirror covers, but nothing major. The biggest and most pleasant surprise though is reserved for how it feels ergonomic and easy to understand. The gauges, seats, steering wheel—the materials may feel a notch below typical Japanese fare, but in terms of usage, it’s up there with them.

Aside from the solid ergonomics, the Toplander mostly succeeds in creating a roomy and practical cabin. The front accommodations are generous, and so too are the middle ones (the seats are reclinable and offer three individual headrests). It’s only in the last row where it feels compromised. With the second row not being able to slide fore and aft, taller individuals will find the rearmost accommodations lacking. The high floor design means that knees on all three rows are slightly bent up, though it’s most noticeable for those in the last row.

For its exterior size, the Toplander’s cargo space is smaller than expected. Around four full-sized luggage and numerous carry-ons can still fit with the third row stowed, but the tall loading height means having to exert extra effort to put them in or out. Plus, folding the third-row seats isn’t a single lever affair. Two steps are required: the first springs the seat cushions up and another brings the seat backs down. In theory, it’s supposed to work smoothly until the cushions bang up against the fully reclined second row. This necessitates having to pull the second-row seatbacks to a fully upright position first before being able to fold the third-row seat completely. It’s the same situation when trying to retrieve the third-row seats from a stored position.

With the Toplander 4x2 manual transmission pegged at P 998,000, this range-topping 4x2 automatic comes in P 1,400,000—that’s a P 402,000 premium more than the three-pedal version (or P 102,000 more than 4x4 manual). Though justifying a price difference almost worth a second-hand car may sound difficult, consider the additional equipment: aside from niceties like leather seats and a fancier infotainment system, the 4x2 EX automatic offers more convenience in the form of automatic headlights, rain-sensing wipers, and cruise control. Heck, it doesn’t even scrimp on safety with dual SRS airbags, electronic stability control with hill start assist and hill hold. It even has a limited slip differential, and rear backup sensors with reverse camera. Honestly, the only thing missing is a 4x4 system which Foton says may be coming soon.

With the introduction of an automatic gearbox in the Toplander SUV, Foton is certainly heading in the right direction. Its PPV rivals may not be sweating buckets just yet, but it doesn’t take a genius to know where all of this could potentially mean. Foton Philippines’s ambitions to become a mainstream brand known for more than just trucks may soon be realized. With the same Cummins engine found in the Thunder pickup, and View and Traveller vans, they could very well put the same Daimler gearbox into every one of their passenger vehicle range and create a value-leader in their respective segments. If the Toplander EX 4x2 A/T is any indication of that, then its rivals would be every reason to be worried then.